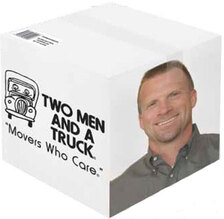 MCPP: What got you interested in the moving industry?

Jon Sorber: My brother and I wanted to do something different to make money after school. A lot of our friends had paper routes or they were involved in the restaurant business. We started hauling trash at first, and then we became involved with helping people move. We had one old truck and serviced the Okemos area. My mother designed the stick-figure logo that we still use today on all of our trucks.

Eventually, I began attending Northern Michigan University, but my mom continued to take moving orders while I was away at college. I had work waiting for me when I got home during break times and summers.

Jon Sorber: Very much so. In the late ‘80s, when trucking deregulated on a national level, it was up to every state to change their own trucking regulations. My mother and I were involved in those hearings. In Michigan, everything deregulated except for household goods. Big businesses were able to get general commodities deregulated, but we were unable to get the change that would allow competition in our industry and benefit the customer. We were very disappointed.

We eventually purchased a trucking authority in order to compete. However, there were still significant challenges to the moving industry that favored large, well-established companies over those starting out or small. The regulations were created in the 1930s to protect the railroad industry and later interpreted to protect large corporations.

We fought for what we knew was right, and eventually the rules changed. No longer were moving companies restricted to an eight-mile moving area. It expanded to 40 miles, which made more sense since our primary mode of transportation is no longer horse and buggy. The eight-mile rule made no sense. We also saw more common sense changes like getting rid of the “as the crow flies” way of calculating mileage. Now we use technology to determine how many road miles are actually logged.

We helped break the monopoly where new movers did not have to “prove need” to get an authority. The old system was an impossible barrier to keep others out. We got it changed to a “shall issue” standard where, if an applicant can prove they meet safety and fiscal standards and are not criminals, they will get a license in order to compete.

Now all licenses are statewide authorities and not whittled down to a two-county area for moving.

MCPP: How did you first get introduced to the Mackinac Center?

Jon Sorber: My mother received articles from the Mackinac Center and shared them with me. I really liked them. I’m a big freedom guy.

MCPP: What value do you believe the Mackinac Center provides?

Jon Sorber: Your work is based on facts, not emotion. The Mackinac Center is able to take complex issues and explain them in a way that people can understand. I’ve contacted folks at the Mackinac Center for information regarding policy issues. It’s a reliable source.

MCPP: Why have you decided to stay in Michigan?

Jon Sorber: It’s home. I’m from here. My kids are from here. I want Michigan to continue to be a place of opportunity for future generations. Michigan is worth fighting for. Like I said before, when we were a small operation, we fought hard so that we could compete with the large companies. The old rules were set up to protect the big businesses and keep competition out. We were able to change that. It’s better for the consumer.

We were able to change an archaic law that was written in the 1930s, and anyone can do it. One person, with enough passion, drive and focus, can make a difference. We now employ 5,000 people and have more than 1,500 trucks on the road.