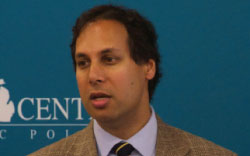 The Center hosted Avik Roy, a senior follow with the Manhattan Institute, as more than 80 people filled the Michigan Restaurant Association in downtown Lansing on April 18. More than 100 people attempted to register for the event. In the weeks leading up to the event Roy did several radio interviews around the state and wrote an Op-Ed for The Detroit News.

The forum was also simulcast live and was viewed by more than 100 people at the time. More than 300 people in total have viewed the simulcast, which you can see here: www.mackinac.org/18414.

The topic was “The Future of Labor Unions in Michigan” and included as co-panelists Rich Studley, president and CEO of the Michigan Chamber of Commerce; former Lt. Gov. John Cherry; and David Hecker, president of AFT-Michigan. Vernuccio discussed how Michigan’s new right-to-work law will promote worker freedom and will mean new and better jobs for the Great Lake State, as well as create better, more focused unions that will have to change to adapt to the 21st century by being responsive to members’ collective bargaining concerns.