District Has Past Infractions; Official Says One Violation Corrected 'Immediately' 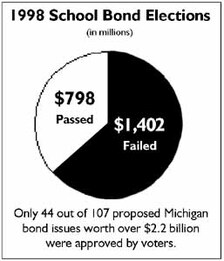 Taxpayer money and resources were illegally used to influence votes on school bond proposals in the Detroit-area Southgate district, charge a local citizens' group and several school board members.

Several school board members also claim that public school resources have been channeled toward promoting a "yes" vote in three previous bond elections, all of which failed to pass.

"Teachers were being required to contact a number of parents concerning the bond," one Southgate board member told MER on the condition of anonymity. "I even caught a school official stuffing 'yes' material during school hours-a clear violation of election laws."

Previous violations that have been documented include one instance at Southgate Anderson High School where students, under the supervision of a school official, illegally used the school's discounted bulk mailing rate to send registration cards and a "vote YES" flyer to voters. The offenders were later required by the post office to pay the 9-cent per item difference between the school rate and the regular bulk mail cost.

Another electioneering violation cited by SCCC involved the use of a video promoting a "yes" vote near voting booths at Davidson Middle School.

"Those who want these multi-million dollar measures to pass have been willing to look the other way when blatant violations of the law are occurring," says Bartaway.

But charges of electioneering are overblown, says Rick Henegar, business manager and election officer for the Southgate district. "When [the Davidson] violation was pointed out to us early in the morning we immediately removed it from the voting area," says Henegar. "[The other allegations] are totally unfounded as far as I'm concerned."

Henegar points out that the district's accusers have yet to report any legal violations to the Wayne County Bureau of Elections, the body responsible for guarding the sanctity of elections. Until they do, their claims remain "matters of opinion without much substance," he says.

"The people against the bond issue are doing their best to try to embarrass the school district in every way they can to convince people not to support the bond issue."

But Bartaway says that district officials-not citizens-are failing in their responsibilities. "Mr. Henegar was told about each violation and, as the school election officer, failed to report them to the proper agency for investigation," he says. "That is a failure of his duties under sworn oath, not ours." SCCC intends to file formal complaints with the Bureau of Elections since school officials have not done so.

The district will put a fourth proposal before voters in April. The proposed $47.7 million is earmarked for school maintenance and construction, but the election outcome will also affect school busing services. School officials ended busing in 1998 when voters rejected a $65.7 million proposal in February.

"Roofs were at the point that if repairs were not conducted major problems would have resulted," says Henegar. "The board of education was forced to eliminate a service in order to pay for necessary capital improvements that would have been covered by the bond proceeds.

"If [the April proposal] doesn't pass, the board will have to evaluate the situation again."

Opponents of the bond measures claim that the elimination of busing was unnecessary. "Administrators and teachers all received pay raises," says Bartaway. "Instead of cutting expenses or even maintaining current salaries, the district decided to take away transportation from the children."

Fifteen recommendations for a successful bond issue are listed in the 17-page study, The Need for Debt Policy in Michigan Public Schools, which can be obtained at www.mackinac.org/article.asp?ID=363.