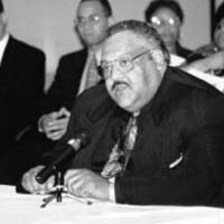 School employee labor union President George Wingfield retreats from his demand that a trustee resign because she supported a charter school.

United Teachers of Flint President George Wingfield and Flint Board of Education President Randall Talifarro have backed off their public demands that a Flint school board trustee resign because of her support for a proposed charter school for minority students.

Wingfield and Talifarro, who charged Trustee Lily Tamez Kehoe with a conflict of interest in December when she endorsed the proposed Flint Advantage Academy, retreated from their position after 150 people packed the board's January meeting. The academy, a charter school designed to serve Flint's 1,000 Native American and Hispanic students, will not open due to its failure to receive authorization from Central Michigan University. 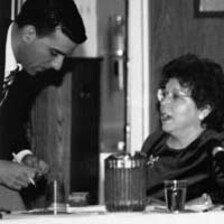 Public school Trustee Lily Tamez Kehoe speaks with a television reporter who covered the Flint school board's volatile proceedings. Charter school opponents had demanded her resignation; the full board recognized her with an award.

Wingfield now says the public should decide whether or not to remove Kehoe from office. Talifarro, who vowed to call for Kehoe's resignation at the meeting, instead remained silent on the issue as the full board addressed other matters including, ironically, the bestowal of an award of recognition on Kehoe.

Kehoe's critics, including Wingfield, Talifarro, and Board Vice President Helen Williams, previously maintained that the support for a charter school neglected Kehoe's responsibility to serve all Flint children. But some supporters of Kehoe charge these critics with hypocrisy.

"The Flint Board of Education is already in the charter school business," says academy board member Catherine Davids, referring to the district's contract with the private Edison Project to run three Flint schools. "Their attempt to silence Lily was very hypocritical."

As for herself, a surprised Kehoe says, "It is my sincere hope that in the future no elected school board member will be persecuted for voicing her opinions on educational issues.

"Our goal as public servants should be to provide the children of Flint with the best education possible. And one of the best ways to achieve this goal is to afford parents and students the choice of where they are to receive this education."