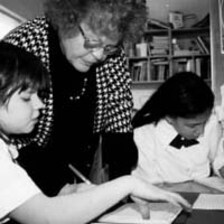 Students of diverse colors and backgrounds work on a project in a Detroit-area Lutheran school.

The more extensive integration at private schools takes place because private school attendance is not as closely linked to where a student lives as is the case with public schools, which tend to reflect and reinforce racial segregation in housing.

"Because private schools do not require that their students live in particular neighborhoods, they can more easily overcome segregation in housing to provide integration in school," explain Jay P. Greene and Nicole Mellow of the University of Texas at Austin. Their study, "Integration Where It Counts: A Study of Racial Integration in Public and Private School Lunchrooms," was presented in September at the American Political Science Association Meeting in Boston.

Rather than simply looking at the racial makeup of a school, Greene and Mellow devised a procedure to capture the extent to which integration is producing positive social interaction. Using a sample of 19 public and 19 private schools, they observed the interactions of over 4,300 students in school lunchrooms, recorded where students sat by race, and calculated the percentage of students who had a student of a different racial group among one of the five students sitting next to or across from them.

"We should no longer accept unquestioningly the widely held view that public schools are better at integration than private schools," conclude Greene and Mellow.

"If we are serious about the benefits of racially heterogenous school experiences," the two note, then policy proposals that would "detach schooling from housing" such as school choice programs should be given serious consideration. Such policies could promote integration without the risk that school failure would damage property values.

These findings will require some rethinking on the part of school choice opponents, who regularly cite public school integration as a key argument against voucher programs. The National PTA, for example, claims vouchers and tuition tax credits "would promote division and separation within the community and negate the long struggle to desegregate our schools and our society." The American Federation of Teachers claims that "educational choice leads to greater socioeconomic and racial segregation of students."

"Without public schools," warns the Center on Education Policy, "children would most likely today attend schools that reflected their own racial, ethnic, religious, or economic background, much as in churches, social organizations, and other groups people join voluntarily."

That view "is deeply held by many people," note Greene and Mellow, "but it is unfortunately supported by little empirical evidence."