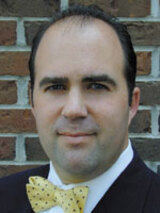 Matthew J. Brouillette is the former Director of Education Policy for the Mackinac Center for Public Policy, an independent, non-profit research and educational institute located in Midland, Michigan. His tenure there was from 1998-2002, until he became President of the Commonwealth Foundation in Harrisburg, Pennsylvania.

Brouillette is the author of numerous articles, Op-Eds, and studies related to education reform in Michigan. He was Managing Editor of Michigan Education Report, the Mackinac Center's quarterly journal focused on K-12 education issues in Michigan. While at the Mackinac Center, Brouillette appeared in many of Michigan's major newspapers and on radio and television programs across the state.

Brouillette is a former middle- and high-school history teacher. He received his undergraduate degree from Cornell College and has earned two post-graduate degrees in education and history from Azusa Pacific University and the University of San Diego.

An Alternative Proposal for Philadelphia

The Case for School Choice

Setting a Higher Standard of Accountability in Public Education