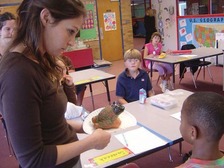 Kendra Freedman and her students at the Learning Circle Academy in West Bloomfield observe the plant life that has sprouted on a model frog. Freedman holds master’s level certification in special education with an autism endorsement. Among her students are Stephen VanElsLander and Olivia Jacubczak, seated, and Dononvan Montgomery, standing.

The Learning Circle Academy has carved a niche for itself in Michigan special education. A small, private school in West Bloomfield, it opened four years ago to serve youngsters with autism-related disorders and those with complex learning disabilities.

Enrollment now stands at 30, up from 10 in the first year. Because it only accepts children within a specific range of conditions and needs, the school can focus on providing academic programs that help those students the most, rather than trying to be all things to all special needs students, one of the founders said. 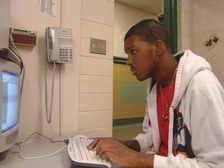 Students in that ability range often develop behavior and academic problems starting around third or fourth grade, McDonald said, because their needs are not met in either setting.  Mainstreaming a child, then pulling him or her out for services such as speech therapy, is not a good solution either, she said.

"Their schedules are not consistent on a day to day basis, and they miss a great deal of instruction. Most of these kids feel like they do not know where they really belong," McDonald said.

Autistic children in particular respond to schedules, and "what people don’t think about is how confusing it is to be ‘pulled out’ all day long," she said. "Our kids start to just tune out or have behavior issues."

Seeing those problems in their own children — Morris and McDonald are each the parent of a teen-age son with special needs — the women tried a variety of remedies, including private school, private treatment and, eventually, a tutorial program they developed themselves and opened to half a dozen other children.

"People started piling in and we thought, ‘Let’s get a building,’" McDonald said. That led to the formation of Learning Circle Academy, first a non-profit organization and now a registered nonpublic school in Michigan. The group rents space in the Irving and Beverly Laker Educational and Youth Complex, part of the Congregation Shaarey Zedek, in West Bloomfield. Tuition is $17,000 a year. Class size is limited to 10, with three teachers per classroom.

Parents who come to the Learning Circle Academy typically feel their conventional public school districts are not meeting their children’s needs. Federal law guarantees every child with special needs a "free and appropriate public education," but at times parents and educators can’t reach agreement on what "appropriate" means.

That’s what happened in the case of Cheryl Shear’s son.

"We agonized. We wanted to keep him in public schools," said Shear, a Novi resident. Her son, Duncan, did well in younger grades, but when he was placed in a regular education classroom in middle school, with help from an aide, "all of a sudden they started to do everything for him. He wasn’t writing. He wasn’t paying attention. … She (the aide) was writing everything down for him," Shear said.

This pattern of "learned helplessness" happens when students with learning disabilities are given too much help, sometimes unwittingly, by teachers or paraprofessionals, McDonald said. "They don’t teach them (paraprofessionals) to fade back."

"If we had pushed harder, we could have gotten the school district to do things," Shear said, but her son was already unhappy and complained about going to school. He had complaints about the Learning Circle Academy, too, but not for long, she said

"They understand him. They’re accepting of him," she said. At his former school, "we were told he couldn’t learn multiplication yet. Here he picked it up in a few months."

McDonald and Principal Amy Seidman attribute stories like that, in part, to the school’s educational philosophy, which rests on the Reuven Feuerstein Theory of Structural Cognitive Modifiability. Feuerstein, a cognitive psychologist, is the founder and director of the International Center for the Enhancement of Learning Potential in Israel. Like Maria Montessori, whose educational theories led to today’s Montessori schools, Feuerstein developed a philosophy of learning that rests on the belief that the nervous system can be modified to achieve cognitive growth. In practice, McDonald said, that means helping students "learn how to learn." The goal is to help the students become independent thinkers.

The school day includes subjects like math, science and English, but also "cognitive training," "thinking skills" and "social skills." Children with autism-related disorders, in particular, do not always understand that other individuals have thoughts and opinions different from their own, McDonald explained. Socially, they don’t always recognize facial expressions or understand that those expressions are a clue to someone’s feelings.

Social skills class teaches them "how to be social," Seidman said. "How to talk with peers. How to go to a store and buy a T-shirt they want. How to be a teen like any other teen in our society."

That social training appeals to Shear, who says there are things her son learns by going on field trips with his friends that he can’t learn in a classroom or from his parents.

Field trips are a regular and important part of the program, McDonald said, and is the school’s way of seeing that students are "included" in the world at large. "Inclusion" is often considered a primary goal of special education programs, emphasizing the importance of having children with special needs interact with children in regular education settings. The idea is that children in regular programs will be academic and social role models for the children with special needs, while at the same time learning to accept and include them.

"I was a big advocate of inclusion," she said, until her own son realized for himself the differences between himself and his classmates. "He sort of gave up on himself."

"We see kids come to us with very poor self-esteem," she said. "But here, everybody is like them."

Now serving fourth though 12th graders, McDonald and Morris hope to expand programming to include younger grades in the future. They also are working toward accreditation through the North Central Association of Colleges and Schools. But growth will depend heavily on how many parents can afford the $17,000 annual tuition, which covers rent, salaries and supplies. The school does accept contributions, which are tax-deductible, and has a limited scholarship program.

"Almost every day I talk to people with kids who are so great for this school, but they can’t afford the tuition," McDonald said. In other cases, she turns away parents who can afford the school, but whose children have different disabilities and wouldn’t be helped by the Learning Circle program.

McDonald said that conventional public school special education programs, which are required to serve all children with all special needs, can’t offer focused services to each student. Shear suggested that research into learning disabilities, and ideas for intervention, may be progressing too quickly for public school programs to keep up.