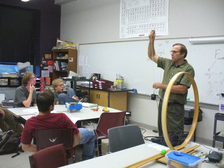 High school teacher Randy Bos works with students in the science laboratory at Black River Public School in Holland. Some officials say the higher cost of facilities is one reason there are not more charter high schools in Michigan.

So far, results are mixed. 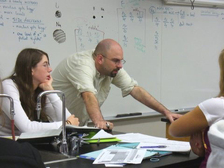 National Heritage Academies, which operates eight elementary public charter schools in the area, does not plan to open a high school itself but has had "very preliminary" meetings with charter high school operators about opening a Grand Rapids program, a spokesperson said. The program would not be operated by NHA.

In an unrelated move, a group of West Michigan businessmen has filed a request to open a charter high school in Grand Rapids modeled after University Preparatory Academy in Detroit. That request has not yet been approved by Grand Valley State University, although it is among the final four being considered, according to GVSU officials.

Meanwhile, a new policy in the Kent Intermediate School District has changed the way by which students can apply to attend conventional public schools in a district other than their assigned district. Intermediate school officials said the new policy was needed because the former system gave an unfair advantage to certain groups of students. Charter parents said they fear the new system will make it harder for them to send children to the high school of their choice.

"I don’t want to gamble on my child’s education," said Pam Sult, a Grand Rapids parent involved in the effort. "I want to go someplace where I’m confident."

The situation in Kent County demonstrates the demand for public charter high school programs in Michigan, according to Stephanie Van Koevering, executive director of the Michigan Council of Charter School Authorizers.

"There is strong demand statewide," she said. "There’s demand in Flint, Saginaw, Kalamazoo. … We need to figure out a way to make that happen."

Pupil enrollment figures show that of all the students enrolled in Michigan public charter schools in 2005-2006, fewer than 20 percent were in ninth through twelfth grade. In comparison, of all the students enrolled in conventional public school programs, more than 30 percent were high schoolers. Of the 229 public charter schools in operation in Michigan this year, 99 have at least one high school grade, according to Dan Quisenberry, president of the Michigan Association of Public School Academies.

Charter school groups suggest various reasons for the lower high school enrollment: that charter schools are still "growing" their high school programs, that there are fewer requests to open charter high schools and that those groups who do want to open a school might be stopped by the legislative cap on the number of schools.

Some of the market demand for charter high schools will be met by K-8 schools who are adding a grade at a time, Van Koevering said.

That’s the approach used by The Romine Group, which manages five charter schools in Michigan. All of the schools opened with elementary programs but are now in various stages of adding high school, John Romine, company president, told Michigan Education Report.

"If we’re doing a good job K-8, I think we have a moral obligation to create a high school program for those kids in the environment their parents have selected," he said. "It’s a deliberate philosophy on my part."

Quisenberry said that the number of charter high school students in Michigan has doubled in the past five years, from about 6,300 to 14,000. Approximately 3,000 seniors graduated from 85 Michigan charter high schools last year; in eight cases, it was the school’s first graduating class.

Still, only about 25 percent of the applications for new charter schools include high school programs, according to Van Koevering.

"Educating a high school student is very different than educating a student in K-8," Van Koevering said. "These are two very different approaches to teaching and learning. High schools require a great deal more in terms of facilities."

Black River Public School, a public charter school in Holland, spends about $1,000 more per high school pupil than elementary pupil, according to Head of School Dave Angerer. In keeping with its original mission as a college preparatory academy, the school offers numerous Advanced Placement courses to its upper level students, he said. That curriculum is expensive, and so are support facilities such as science laboratories.

"We’ve devoted our resources to that," he said.

Black River opened as a sixth- through ninth-grade operation and then added one higher grade in each of the next three years. After the first seniors graduated in 2000, the school began adding lower grades, working downward until reaching kindergarten this year. The school, named one of the country’s top 100 high schools in 2006 by Newsweek magazine, now has 780 students with a waiting list of 150.

Romine said that adding high school grades "has become the most difficult task I have faced in 44 years in education."

In elementary classrooms, one teacher can cover all the core content material, he said, but even a small group of high school students will need several teachers who specialize in different subjects and who meet the highly qualified teacher provisions of the federal No Child Left Behind Act. One way smaller charters cope is by hiring part-time teachers — if they can find them.

"That first year or two is monstrous in finding part-time teachers," Romine said.

New charter operators also might find it difficult to pay for such high school facilities as band rooms and science labs, Van Koevering said. While conventional public school districts may levy a tax to raise money for new buildings or renovations, charter schools cannot. Instead, charters use part of the per-pupil aid they receive from the state, or privately raised funds, to pay for facilities.

"The challenges present themselves fairly immediately," she said.

That situation has eased for some long-term charters, Romine said, as investors have become more willing to purchase bonds or otherwise invest in schools with a proven track record.

Another explanation for lower charter high school enrollment is that some students migrate to the conventional public high school to participate in sports or extracurricular activities if their charter high school doesn’t offer them, according to Todd Ziebarth, a senior policy analyst with the National Alliance for Charter Schools.

"I think what has to happen at the middle school and high school level is you need to give kids a full school experience," he said.

"We can’t offer the breadth of programming other high schools offer," he said, explaining that the school’s sports program and technical education programs are smaller than most conventional high school programs.

In Grand Rapids, about 300 people showed up for a meeting between parents and National Heritage Academies officials about future high school options, Sult said. "Most of them were charter parents. My daughters went to nine years of charter school and we still don’t have a high school."

National Heritage spokeswoman Tara Powers told Michigan Education Report that NHA does not plan to open a high school program itself, but has had discussions with other charter operators about opening a Grand Rapids site. NHA operates eight elementary charter schools in the intermediate district.

"It’s very, very preliminary. There’s not much more to share at this point," she said. NHA’s "singular focus" always has been elementary education, she said. "We feel we’re good at it, but we still have the opportunity for improvement."

In the meantime, many charter students in the immediate Grand Rapids area attend a conventional public high school after eighth grade. Some of their parents are unhappy with a new agreement adopted by the Kent Intermediate School Superintendents Association early in 2007. Titled "The Kent ISD Collaborative Schools of Choice Plan," the agreement outlines two ways in which students who live in one of the KISD’s 20 conventional public school districts may attend school in a different district.

The main method, an option any conventional public school district may offer under state law, is called Open Schools of Choice. It allows parents to enroll their child in any district as long as that district has room. The student’s assigned district does not have to give permission, but the parents have to apply during a specific time period in the spring. Each district can set limits on how many students it accepts under this plan, holding a lottery in cases when the number of applicants exceeds the number of seats.

The second method, called Section 6 after a different provision in state regulations, allows families with "special circumstances" to enroll in a district outside their assigned district if the assigned district "releases" them and if the receiving district agrees to accept them. Section 6 releases can be done at any time.

Under the KISD’s former policy, a student who had attended schools outside the conventional public school system for at least two years would routinely be released under Section 6, according to KISD Superintendent Kevin Konarska. But this year the policy was changed due to the belief that it gave those groups — mostly charter and private school students — an unfair advantage.

"We felt it wasn’t fair to give students a preference from those programs," Konarska explained. "We were even concerned that legally it may be questionable."

Section 6 is supposed to be reserved for extenuating circumstances, he said, such as allowing a student to finish high school where he or she started, even if the family moves.

The new policy requires the charter and private parents to apply to the district of their choice through the Open Schools of Choice policy and, if necessary, participate in the lottery. In this first year of implementation, Konarska said, some parents may not have been aware of the new policy and consequently missed the deadline to apply. Others might not have been accepted into their first choice of high schools, depending on the number of seats available. Overall, about 2 to 3 percent of the approximately 100,000 students living within KISD boundaries apply for schools of choice in a given year, he said.

Grand Rapids Public Schools, the largest district in the KISD, said 954 students requested Section 6 releases this year. Of those, the district approved 623 and turned down 331, saying the latter group had failed to show that city schools could not meet their needs, according to an article in the Grand Rapids Press.

Konarska said he didn’t anticipate the controversy the new policy has created.

"I really felt the community would understand … that this would be the fair thing to do," Konarska said. "Sometimes change takes time to process and that’s the situation now."

Public debate on the issue has been carried out at the Grand Rapids Board of Education meetings, in letters to local media and at a Web blog Sult initiated, primarily regarding the number of parents requesting to leave the Grand Rapids Public Schools system. Some accuse charter parents of "white flight" to suburban schools and others say parents should be willing to give the city’s high schools a chance.

"We feel as parents that our children’s safety and the education they get are extenuating circumstances," Sult said. "We don’t do this just for fun."

Sult’s own daughter and some other Excel students were released by GRPS to attend East Kentwood High School in Kentwood Public Schools this year, primarily because Kentwood had agreed to accept them before the new policy was made known, according to Sult.

"We really believe the right thing to do is let everybody go," she said. "If you want to have a good education, you should not have to pack up your belongings and move."