Contracting for custodial work up more than 26 percent 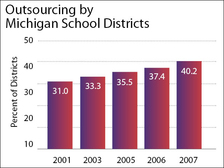 A growing number of Michigan public school districts are relying on the contracting of noninstructional services for cost savings. Source: Mackinac Center for Public Policy

More than 40 percent of the conventional public school districts in Michigan contract for at least one support service, according to a survey completed by the Mackinac Center for Public Policy, up from 37.4 percent a year ago. The largest increase was seen in custodial contracting.

The center’s fifth school privatization survey shows that 222 of Michigan’s 552 districts contract for at least one of the three major noninstructional services: food, custodial and transportation. "Survey 2007: More Growth in School Support Service Privatization" found that 22 districts chose to contract for at least one service for the first time in 2007, while six districts resumed in-house operations, for a net increase of 16 districts.

Nearly 90 percent of the districts reported they were satisfied with the results, and 80 percent reported saving money. The survey was conducted by Daniel J. Smith, an adjunct scholar with the Mackinac Center and a Ph.D. candidate in economics at George Mason University, and Michael D. LaFaive, director of the Mackinac Center’s Morey Fiscal Policy Initiative.

The survey was completed on June 30 to coincide with the end of the fiscal year for public schools in Michigan. As of that date, an additional 42 districts were considering privatizing one or more support services in the 2007-2008 school year.

"Districts across the state are adopting support service privatization as a way to drive more money into the classroom," LaFaive said. "Officials recognize that noninstructional services are ancillary to the mission of their schools. Under a well-written contract, districts can save money, improve services, or both."

Custodial services continue to be the top growth area for private contracting. Statewide, the survey found that the number of school districts using private firms for custodial work rose from 63 to 80, a 26.8 percent increase. A similar increase took place between 2005 and 2006. In all, about 14 percent of conventional public school districts in Michigan now contract for custodial work.

Food service remains the most frequently outsourced function, with 164 districts — or 29.7 percent of all districts — reporting having contracted either management or operation of their program. The contracting rate was up by one percentage point from 28.7 in 2006.

Contracting for busing services can be found in 24 districts, or 4.3 percent, statewide, up slightly from 4 percent one year ago. The tally does not include special education busing.

Of the 222 districts that contract for at least one support service, nearly 78 percent report saving money, while 89 percent report being satisfied with their respective contracting experiences.

In a new feature this year, survey results also were reported by enrollment levels. Medium-sized districts tend to contract more than large and small districts. More than half of districts that are between 2,000 and 4,000 students contract for food, custodial or transportation services.

The survey findings are available online at www.mackinac.org/8881. Also this year, the center published "A School Privatization Primer," one in a series of publications on school finance and management. The primer describes the history and incidence of competitive contracting and includes a guide to help districts request, award and monitor contracts. The primer is available at www.mackinac.org/8691.