Arguing for and against federal aid to sub-Saharan Africa 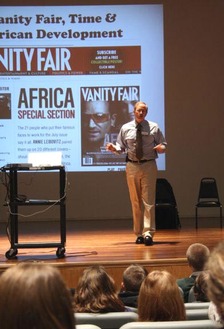 Greg Rehmke, director of educational programs for Economic Thinking/E Pluribus Unum Films, shows examples of the coverage given to African affairs by American magazines as he speaks to debate workshop participants in Traverse City.

Students heard from three national speakers on this year’s topic, "Resolved: The United States federal government should substantially increase its public health assistance to sub-Saharan Africa." The workshops are designed to help the students prepare to argue both for and against the given topic in debate competitions throughout the country, involving more than 100,000 students annually.

The speakers addressed debate methodology and tactics, as well as discussing the economic impact of foreign aid and how well it has been put to use in the past. Points that students discussed during the workshops included research on how foreign aid is often misappropriated by dictatorial governments, methods of disease prevention that have proven successful in the past (such as the use of DDT to fight malaria) and the moral arguments against coercing taxpayers into funding foreign aid when nonprofit groups raise money from willing donors.

The Center asks each participant to fill out evaluation forms in order to improve the workshops from one year to the next. One student, although just a beginner, wrote that she learned so much from the experience, "I feel like I am confident enough to go to the state finals."

Another student said she appreciates the workshops because she feels high school debate is "underappreciated" and "it’s nice to have an activity that supports the activity."

JoAnne Peterson, debate coach from Grand Rapids City High School, said although the workshop will help her team in the upcoming season, "The impact on the future and investment in our young people is the most powerful gift of all."

For the third consecutive year, workshop participants have an opportunity to win a $1,000 college scholarship if they choose to participate in an essay contest sponsored by the Center. Winners will be announced in the spring of 2008.