Following the lead of the Kalamazoo Promise

Schools and communities develop their own scholarship initiatives 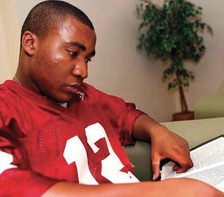 Alex Plair II, 18, of Kalamazoo, a sophomore at Western Michigan University, was among the first students to benefit from The Kalamazoo Promise, an anonymously funded free-tuition program for graduates of the district’s high schools.
AP Photo/Shawano Cleary

Is the promise of a college scholarship enough to motivate students to study harder, convince parents to choose a particular school or bring business to a community?

To varying degrees, that is what Michigan schools and communities will find out in the next year as they launch their own college tuition programs in the wake of the Kalamazoo Promise. Organizers of the original Promise, which offers to pay up to four years of tuition to eligible Kalamazoo Public Schools students, say it has boosted enrollment, raised graduation rates and brought new residents to the Kalamazoo area.

At least one researcher said, however, it is too early to tell whether the program will achieve its broader goal of revitalizing Kalamazoo’s urban core. In the meantime, other schools, school districts and communities are putting eggs into similar baskets. Some are in the talking stage, while others have announced formal programs. For example:

— Carrollton Public Schools in Saginaw County has set aside $14,400 in the general fund budget to purchase 40 contracts through the Michigan Education Trust on behalf of this year’s kindergarten and preschool students. When those students graduate, eligible members will receive financial awards equaling one year of tuition at a community college.

— In Northport, at the tip of Michigan’s Leelanau Peninsula, community organizers launched a college tuition program to maintain enrollment and keep the local high school open. They plan to raise money through private donations and community fundraisers.

— Kalamazoo Advantage Academy, a public charter school in downtown Kalamazoo, has responded to the Kalamazoo Promise by offering its own tuition program. The Gift for Tomorrow was announced this summer.

— Bay City Public Schools will pay part of the administrative costs for Bay Commitment, a 100-scholarship program launched jointly with the Bay Area Community Foundation aimed primarily at students who might not otherwise attend college.

A visiting scholar at the W.E. Upjohn Institute in Kalamazoo said she is not surprised that other communities are taking up the idea of Promise programs, but also cautioned that while it’s clear that the Kalamazoo program resulted in higher enrollment, it is not clear yet how much and what type of effect there has been on the housing or business markets in the city itself.

"It’s been great for the kids … and good for the district. It looks like it’s had an effect curtailing the dropout rate," Michelle Miller-Adams said. But she called the economic development effect on Kalamazoo’s urban center "less clear," and something that will take more time to evaluate.

Miller-Adams is completing research on the Promise that will lead to a book explaining the program’s origin and its economic, social and educational effects. Launched in 2005, the Promise made national headlines when organizers announced that anonymous, private donors would pay for college tuition for every eligible KPS graduate. So far the program has been credited with increasing enrollment by more than 1,000 students.

While Promise organizers describe the program as an effort to revitalize the Kalamazoo area, creating an educated workforce that will attract business, the tuition incentive also has had the effect of keeping students — and the state aid that follows them — in the Kalamazoo Public Schools system. The longer a student attends Kalamazoo Public Schools, the higher the award. Students must reside in the district; they may not enroll through schools of choice programs. At about $5,500 in state aid per general-education pupil last year and $7,500 in state aid per special-education pupil, increased enrollment of 1,000 adds at least $5,500,000 million to the district’s budget.

That incentive took a toll at Kalamazoo Advantage Academy, a public charter school in downtown Kalamazoo, which said about 70 of its students transferred to Kalamazoo Public Schools because of the tuition offer. In response, the academy has announced its own Gift for Tomorrow, which will pay up to 35 percent of the cost of college tuition and fees to students who leave the academy after eighth grade and go on to graduate from any Kalamazoo public high school. The academy does not have its own high school program.

In effect, the Gift for Tomorrow takes away the financial incentive to switch schools. By combining the Gift benefits with the Promise benefits, a student would receive the same amount of tuition assistance that he or she would receive from attending Kalamazoo Public Schools from kindergarten through 12th grade.

In northern Michigan, private money also will pay for the Northport Promise, but that money is not already in the bank. Steering committee members say they will have to raise thousands of dollars for a scholarship program that they hope will attract enough students to keep the local high school open.

With its entire K-12 operation housed in one building near the tip of the Leelanau Peninsula, Northport Public Schools has approximately 75 students enrolled in seventh through 12th grade this year, including a senior class of 12. That number has declined in recent years, and when enrollment projections predicted even fewer students in the future, the local board of education discussed the possibility of eliminating the high school program.

"How small do you get before you lose opportunities for kids?" Superintendent Ty Wessell said, describing the situation to Michigan Education Report. Low enrollment makes it hard to offer choir or band programs, he said as an example, as well as specialized academic classes that might only attract a handful of students.

"The board looked at all sorts of options last year," Wessell said, but eventually agreed to keep the high school program operating in part because community members agreed to launch the Promise.

The idea is not to turn Northport into a larger district, he said, but to keep enrollment stable.

"I think we can do a very strong program with 75 students," he said. The district already offers some classes online through the Michigan Virtual High School, and is discussing the possibility of guest student programs or distance learning with other districts.

Sally Viskochil, chairwoman of the Northport Promise steering committee, attributes the enrollment decline over the years to loss of jobs from the closing of the local hospital and controversy over a sewer issue. Housing development in the peninsula tends to attract retirees and people who can afford waterfront vacation homes, she said, not young families. While that helps the local tax base — Northport is one Michigan district that takes in more money from non-homestead property tax than from state aid — it doesn’t help school enrollment.

"My motivation is to keep the school open and functioning," Viskochil said. She said she believes that closing the high school program would lead eventually to closing the entire operation. "You’d lose the whole school and by losing a school you lose the heart of a community."

It’s too early to tell if the Promise already has had an impact, Wessell said, but it has generated a number of inquiries.

While Northport hopes to hand out scholarships as early as 2008, Carrollton Public Schools is taking a long-term approach. The board of education will set aside $14,400 in each of the next 10 years to pay for 40 trusts on behalf of this year’s kindergarten and preschool students. The money will be invested through the Michigan Education Trust, a prepaid college tuition plan administered by the state Department of Treasury. At graduation, eligible students will receive enough for a year of community college tuition, according to Carrollton Superintendent Craig C. Douglas.

Douglas’ interest in paying for college is personal and professional. In addition to being a public school superintendent, he sits on the board of the Michigan Higher Education Assistance Authority and he also is the father of three college graduates.

To be eligible for Carrollton’s program, a student must remain enrolled in Carrollton schools from preschool or kindergarten through 12th grade, have consistent attendance, meet academic requirements and graduate. That includes maintaining a 3.0 grade point average in high school and meeting or exceeding state requirements on standardized tests throughout elementary and middle school, Douglas said. The offer is open to residents of the Carrollton district and to non-residents who enroll through the schools-of-choice program.

"We want them to make a commitment to the school," Douglas said.

That includes parents, who must attend all parent/teacher conferences as well as two extra parent meetings each year. They also must volunteer for at least one school activity.

"The parent is the primary teacher. Always has been, always will be," Douglas said. "Now we’ve got the carrot to bring the parents to the table."

The district expects the program will pay for itself by keeping students in Carrollton schools and attracting newcomers. Every student brings in approximately $7,000 in state aid.

"The brilliant piece of this, in my mind, is that the state allows you to put away a little at a time," he said. "You don’t need someone to roll up in a Brinks truck."

The MET program has always been available to school districts, according to treasury department spokesman Terry Stanton, but this year new rules allow districts to buy the trusts without naming individual beneficiaries at the time of purchase.

"We expect that will make it a little more popular," he said.

Taking a more focused approach, Bay City Public Schools and the Bay Area Community Foundation have announced Bay Commitment, a two-year pilot scholarship program targeted at students who have been enrolled in the district long-term and meet academic criteria, but who might not otherwise go to college. The recipients are expected to include a number of "first-in-the-family" college enrollees. One hundred scholarships, for up to $2,000 each, will be awarded to Bay City Public Schools graduates beginning in 2008. The money must be spent at nearby Saginaw Valley State University or Delta College.

While the school district will not fund the scholarships, it will pay approximately half the administrative cost to establish a College Preparation Services department, which will match students to scholarships, help families make college plans and help with the transition to college. The school district’s share will be about $50,000, according to Superintendent Carolyn Wierda.

The foundation and other philanthropic groups will pay for the rest of the administrative costs and will raise money for an endowment to finance the scholarships. The emphasis is deliberately local, Wierda said, in the hopes that students who grew up in Bay City and who attend a local college will stay in the area to build a skilled, local workforce.

SCHOLARSHIP PROGRAMS NOT A GUARANTEE

In Kalamazoo, Upjohn researcher Miller-Adams said a scholarship program may give a school district an edge, but it’s no guarantee of enrollment. Parents consider many variables in choosing schools, among them size, safety, religious affiliation, test scores and programs offered, she said. As of the fall of 2006, for example, Kalamazoo Public Schools scored lower than the five surrounding conventional public school districts on math and reading scores in all grade levels on the Michigan Educational Assessment Program. In some cases the difference in scores was less than 10 percentage points, but in others it was as high as 35. The Upjohn Institute will track MEAP scores and other academic markers as part of its research.

It appears the Promise holds the most appeal for students who likely would not go to college otherwise, either for lack of funding or because they lack role models or other support systems, Miller-Adams said.

"If you’re in the (college education) market anyway, the Promise was a draw, but only a draw," she said. "There’s a lot of scholarship money out there."

The economy plays a role in school choice, too, she added. "It’s not like people are flooding in here," she said. "Nobody is going to move somewhere without a job."