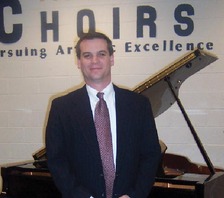 When Chris Card began his teaching career 13 years ago, no one ever told him he wasn’t required to belong to the Michigan Education Association.

"If I had known then what I know now, as the saying goes," Card said from his classroom at Webberville High School, east of Lansing. "As a new teacher coming out of college, they just sign you up. No one tells you your options."

Those options, under state and federal law, include not joining a teachers union. Card said he was never told that.

“That’s where it really matters,” he said. “The local does the negotiating, our salaries, benefits; that’s the kind of thing unions are for, not all the political stuff.”

"I had to do all this research on my own," he said. "I did a lot of digging. It wasn’t until last year that I fully understood it."

Card began his career as a music teacher in Cadillac, where he spent seven years. It was there, during the 1998 gubernatorial campaign, that Card began to question the Michigan Education Association’s activities.

"They were backing Geoffrey Fieger for governor, and I’m thinking ‘this is my union?’" Card said. "They are so far away from the grassroots teachers in the classrooms."

He then taught in Byron Center for three years, where he was classified as a "fee payer." Under such status, he did not pay dues to the National Education Association, and only had to pay the portion of his MEA dues that the union could show went toward collective bargaining.

Now, as a religious objector, Card pays the full amount of MEA and NEA dues combined, but it goes instead to a charity.

"This isn’t about money," he said. "I’m not doing this to buck the system. I pay more now than I paid under fee status, but it goes to a local food bank, and I’m so glad they get that money now. I’m really happy for them."

According to the MEA’s Web site, the combined MEA-NEA dues for an individual teacher are about $570 per year.

Card makes it clear that he does not have a problem with his local union. He remains a member of the local and pays dues to support it.

"That’s where it really matters," he said. "The local does the negotiating, our salaries, benefits; that’s the kind of thing unions are for, not all the political stuff."

Card said he even applied to be part of the local’s negotiating team next year.

"We’ll see how that goes," he laughs. "That will be an interesting election."

Card said he cannot "in good conscience" pay money that he believes the state and national unions use for causes to which he objects on moral grounds.

"The MEA and NEA make me sick," Card said bluntly. "I finally decided to take a public stand."

At a hearing last fall, Card had to show that his religious objector stand was at odds with MEA membership.

"Their representative tried to portray me as being very narrow minded," Card said. "She said the Bible doesn’t say anything about my faith not allowing me to be in a union. But I said it does mention that I have to worry about who I associate with."

Card said the MEA/NEA has a "strong liberal agenda" that he thinks does not fairly represent teachers, nor does it have much to do with education.

"When they (the unions) get involved in all these political issues, how does that benefit kids?" Card said. "The stuff I’ve seen the MEA push for has nothing to do with teaching."

The months since his victory have been difficult, but Card does not regret his decision.


"The union has filed two grievances against me, both of which were found to be without cause," he said. "They even wanted to reduce my salary. Have you ever heard of a union wanting to reduce a teacher’s salary?"

Card said some fellow staff members refuse to speak to him, months later, no matter how cordial he is to them.

"It’s really petty," he said. "But you can’t pin down exactly why. You can’t go to them and ask why they behave this way. I just have to hope they respect my rights as I respect theirs."

Card is in his second year at Webberville, which means he will be eligible for tenure at the end of the year. Tenure is not transferable between school districts. He admits this made his decision more complicated.

"I’m totally vulnerable," he said. "It was a real risk, but now it’s all about my performance. That’s what it should hinge on. I’ve never received a poor evaluation."

Card said a few other teachers have approached him in private, asking about his research into the issue. About 680 teachers in Michigan have "fee payer" status, which was Card’s first move in severing ties to the union.

"This may not be right for everyone," he said. "But I would do it again in a minute. For me it’s the right thing. I don’t necessarily disagree with being in a union, but where people have rights not to be, they should be allowed to exercise those rights."