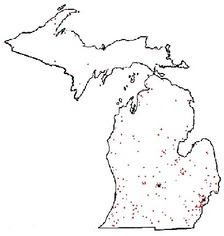 Each dot on this map represents one of the nearly 180 school districts that have privatized at least one non-instructional service.

Every week brings new cost-saving developments from around Michigan as public schools try to direct more money to the classroom and protect teachers’ jobs by outsourcing non-instructional services.

"I think you’re going to see this happen more and more," according to Lisa Brewer, a spokeswoman for the Michigan Association of School Business Officials, a professional association of school financial administrators. "It’s been going on for a while now, but it seems people are more aware of it."

A biennial study by Michigan Privatization Report, a publication of the Mackinac Center for Public Policy, shows more than one-third of public schools in Michigan now privatize at least one service. That figure has steadily risen, from 31 percent in 2001 to 34 percent in 2003 and 35.5 percent in 2005.

The most common services privatized by schools are janitorial, food service and busing. Some school districts, however, are starting to look at other operations in which costs can be cut. With large increases each year in the state-run pension system for school employees and high-cost health insurance plans, districts are becoming more creative.

Ithaca Public Schools, for example, privately contracts for psychological services, a move that has reduced costs by $32,000 a year, compared to what the school was paying the Gratiot County Intermediate School District. Lakeview Public Schools, in suburban Detroit, is spending $1 million less on operations and maintenance after privatizing its custodial work. The decrease takes into account money not spent on increased wages and benefits, inflationary costs and equipment and supplies.

"We are starting to see this approach in a number of different ways," Brewer said. "Administrators and school board members are focused on how to get the best value out of whatever service they’re looking for."

Among the most creative approaches to privatization is a plan to contract out for the jobs of three top administrators in the Ypsilanti Public Schools. The positions of chief financial officer, director of human resources and superintendent were being considered for just such a move, which the district said would reduce annual costs by about $130,000.

Over the past year, schools have reduced expenses by as much as $250,000, as was the case in Albion when that district privatized custodial services. In Grosse Pointe, a potential $50,000 loss was turned into $90,000 of revenue when food services were privatized.

Cooperative approaches also are being pursued. The Muskegon Area ISD is investigating privatized busing for six local districts that could reduce costs by up to $280,000. Ypsilanti and neighboring districts Willow Run and Lincoln have also joined in an effort to investigate cost reductions through privatized busing.

Lincoln Consolidated Schools Superintendent Fred Williams told The Ann Arbor News that his district spends $60,000 a year on each of its 65 buses, and that one private company said they could do it for $40,000 per bus each year.

As Ypsilanti, Lincoln and Willow Run discussed potential savings through privatized busing, the issue of job losses again came up. John Fulton, Ypsilanti’s director of human resources, told The News that such fears were unfounded.

"If they take over three districts, they need to hire drivers," Fulton said. "So they’re going to be looking at the three districts to hire the best drivers."

When considering such a decision, schools can look to the success of Pinckney for direction. Pinckney Community Schools privatized its busing operations in 1994 and, according to The Ann Arbor News, has renewed the contract four times. Linda Moskalik, assistant superintendent for finance, said the contract will be renewed again this year.

Union activists say privatization puts custodians and bus drivers out of work, although in Pinckney’s case, 90 percent of the drivers went to work for Laidlaw Transit, all at the same hourly pay rate the district was paying.

Aside from the revenue of selling its buses to Laidlaw, Pinckney no longer must deal with the expenses of union negotiations or grievances from transportation staff.