"You have to be a one-woman army" 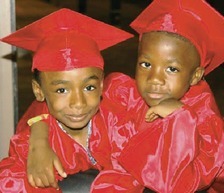 Ramell Morgan, left, and Nyrell Powell pose in their kindergarten ‘graduation’ caps and gowns. The two are now first graders at Sankofa Shule in Lansing.

"I have three grown sons, but if they were of age, I’d be sending them here," she says.

"Here" is the Sankofa Shule (pronounced "San-koh-fuh shool") Public School Academy, a charter school in Lansing where Cain is superintendent.

Depending on the day of the week, or even the hour of the day, Cain says she fills many roles at Sankofa. While her official title is superintendent for the public charter school, Cain says she wears many different hats, depending on what needs to be done. 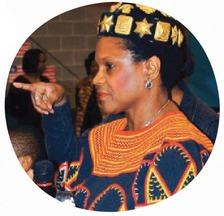 "At charter schools, especially ones that are self-managed like we are, you can be superintendent, principal, curriculum director, human resources director, custodian, secretary, classroom teacher and lunch aide all at once," she laughs. "But you just do what you have to do to get the job done and help the kids."

Cain came to Sankofa Shule after a 30-plus year career in the conventional public school system. She began as a first grade teacher and reading consultant in the Detroit Public Schools in 1968. She moved to Lansing six years later when her husband, Eugene Cain, took a job with the state Department of Education. She started as a long-term substitute teacher with the Lansing School District, eventually holding positions including education resource specialist, classroom teacher, elementary school principal and director of elementary education.

It was more than a little shocking to her former co-workers when, in 2001, Cain agreed to become the new administrator at Sankofa Shule. Eugene, it should be noted, also made the jump. Having worked in conventional public school districts and for the state, he is now superintendent of El-Shabbazz Academy, another Lansing-area charter.

"There were some tears, but others thought I was betraying them," she said. "They told me I had jumped ship, that I was the enemy."

Cain says she does not see herself or her school, however, as competing against the Lansing public schools.

"We’re competing against parental apathy, lack of education, drugs, low self esteem," she said. "This is about the kids, and that should be the bottom line for us all."

Cain said she had been a supporter of Sankofa Shule from its inception in 1995.

"It was facing some challenges and I didn’t want to see it go out of existence," she said. "I felt I had some things to offer."

Unlike many in the conventional public school setting, Cain said she was a supporter of the charter school concept from the beginning.

"Competition is good because it raises everyone’s level of concern," she said. "And that always benefits kids."

While working in the Lansing public schools when charters came into existence, Cain said she noticed the district’s reaction to that competition.

"Before, they never had enough money for all-day kindergarten," she said. "But when the charters started offering it, suddenly Lansing found the money for it. They started offering more art, more music, more phys-ed. They responded to the competition."

Sankofa Shule currently has about 200 students in kindergarten through eighth grade. It offers an "African-centered" curriculum, and this month took several students on a field trip to Africa. The school’s name comes from Swahili. Sankofa, Cain says, means "going back, searching, learning lessons while young and moving forward." Shule means school.

"We incorporate the heritage and traditions and culture into everything we do," Cain said. "We don’t limit it to just one month."

Within the African-centered educational approach, the school focuses on helping students become academically and behaviorally competent and socially conscious. It also offers a wide variety of extra curricular activities as well, including science and chess clubs, basketball and soccer teams, drama, choir, yearbook and opportunities for community service and job shadowing. The school’s philosophy is based on "the way to learn is by doing," Cain said.

The school also uses multi-age classes in order to place each student at their appropriate level of development. Cain said this is necessary because about half of all new students enter the school below grade level.

Cain said she believes the charter school movement will continue to grow as long as it fills a need.

"People need to have choices," she said. "Students come here for our small setting, our nurturing environment, and you can see a change in their behavior."

Cain said that while charter schools are not perfect, they are relatively young and still growing.

"We do have some challenges because of money, but people come here for the family atmosphere," she said.

"Not only do we get by with less money, but we have the utmost level of accountability a school can have," she said. "Every charter school is one year away from closing."

If charter schools do not perform up to the standards set by their clients – parents and students – families can decide to look elsewhere for educational options. Since under Michigan law state education money follows the student, charter schools can be forced to close down if not enough parents choose to remain. Unlike conventional public schools, charters are subject to a heightened demand for customer service that can and does lead to closure.

"I have a board I report to," Cain said. "Despite what some may say, we follow all the state and federal rules and regulations."

Cain said because her school is authorized through Central Michigan University, that includes another layer of accountability.

"I have a calendar filled with dates for reports and paperwork that has to be sent to CMU," she said. "And they keep on me about it, too."

But ultimately it is the parents who must be satisfied.

"The fact we exist is a good thing," Cain said. "People have to have those choices, and it keeps us alert."