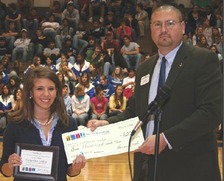 Daniel Overbeek, a senior at Grand Rapids Northview High School, will attend the University of Michigan in the fall. Mark Thrall, forensics teacher at Northview, said he felt the 2005 debate workshop in Grand Rapids was "the best one we’ve ever attended." Both Thrall and Mike Martin, debate coach at Catholic Central, said they plan on attending the 2006 workshop.

Chelsea Baker, a junior from Hudson High School, was the fourth winner.

The 2006 workshops will again be held in Livonia, Jackson, Grand Rapids and Traverse City, Sept. 25-28. Greg Rehmke and Rich Edwards, both of whom spoke at all four workshops in 2005, are confirmed to attend the 2006 sessions. Debate coaches and teachers can call Ted O’Neil at (989) 631-0900 for more information.