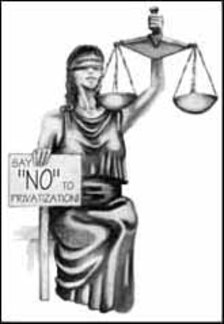 Cities, counties, and states have significantly increased their use of privatization over the past decade. But a great many privatization opportunities remain unrealized due to federal laws and regulations.

Labor-protection provisions may make privatization cost-prohibitive. The best-known of these is Section 13(c) of the legislation providing for federal transit operating subsidies. Administered by the Labor Department (rather than by the Department of Transportation), it stipulates that public workers associated with federally subsidized transit may receive upwards of six-years severance pay in the form of combined salary and benefits. This has the effect of preventing a grant-receiving transit agency from laying off any current transit worker, thus making it virtually impossible to save money by contracting out transit service. The Heritage Foundation estimates that inefficiencies associated with Section 13(c) constitute local government costs of $2 billion to $3 billion annually.

Now that federal transit funding has begun to shrink rather than grow, a number of transit agencies have started calling for 13(c)’s repeal or reform. Similar provisions apply to federally supported public housing projects, making it very difficult for them to save money by contracting out maintenance and repair.

The second federal barrier is clearly the tax code.

Consider three otherwise identical infrastructure facilities that serve the public—an airport, a toll bridge, or a water system. If the facility is owned by investors, it must pay federal corporate income taxes and in most cases it can finance its operations only with taxable debt.

The identical facility, if owned by a government agency, pays no taxes and can borrow at tax-exempt rates. The net effect of these policies is that the federal government tells investors, governors, and mayors: "We prefer that these vital facilities be provided through municipal government rather than by the marketplace." Making tax-exempt bonds available to developers of any public-purpose infrastructure, regardless of ownership, would significantly reduce the antiprivate bias of the tax code (Note: The IRS in January expanded the availability of tax-exempt debt for certain kinds of privatized infrastructure projects). So, of course, would taxing government enterprises on the same basis as investor-owned ones, as Australia and New Zealand are now doing.

The third type of barrier is regulation.

Here again, many federal rules and regulations were written without taking into account the possibility that investor-owned firms could finance, build, own and operate basic infrastructure. For example, the Resource Conservation & Recovery Act (RCRA) seeks to provide less-costly effluent standards for facilities that treat municipal wastewater, as compared with industrial wastewater. But the way RCRA implements this is to exempt "Publicly Owned Treatment Works." This ignores the fact that the private sector can and does own and operate municipal treatment plants. But RCRA subjects them to the more costly regulations that apply to industrial facilities.

There are many other federal regulations that stand as obstacles to privatization of infrastructure. In transportation, the Intermodal Surface Transportation Efficiency Act permits the private redevelopment of certain categories of federally aided highways and bridges—a welcome step forward. But it specifically exempts the most important and commercially attractive portions of the nation’s highway system—the Interstates. It’s no wonder, then, that hardly any states have taken advantage of these provisions. The Clinton Administration in March proposed eliminating this obstacle in its proposed highway reauthorization legislation.

When it comes to airports, the Airport & Airway Improvement Act, at least as interpreted by the Federal Aviation Administration, requires that not only must any operating profits of an airport be reinvested in the airport but also that any proceeds from selling or leasing an airport be reinvested in that airport or airport system. This removes one of the principal motivations for a city or state to sell an airport—the desire to shift its resources into core functions, letting the private sector take over commercial functions. (Fortunately, in its closing days the 104 th Congress enacted a pilot program under which up to five airports can be privatized via lease or sale, receiving waivers from this regulation.)

President Bush attempted to deal with these constraints by issuing Executive Order 12803 in 1992. It was intended to gain the cooperation of federal grant-making agencies, such as the EPA and the FAA, and to eliminate the requirement that grants be repaid if a city or state privatized an infrastructure facility. But the Office of Management & Budget objected, resulting in a compromise that calls for repayment of an amount based on the undepreciated portion of the facilities financed with the grant. Congressman David McIntosh last year sponsored legislation to remove this repayment requirement and to codify EO 12803’s principles into law—but it got lost in the election-year shuffle.

Mayors and governors have become more aware of the crippling impact of these federal laws and regulations over the past few years. The 105 th Congress presents an opportunity to clear away some of these obstacles to privatization.