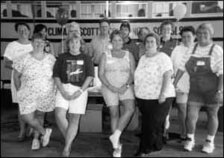 Laidlaw Transit school bus drivers pose for a team photo at an open house sponsored by the private bus company.

On February 19, 1996, the Climax-Scotts Board of Education voted unanimously to become the first district in its region to contract with a private company for the busing of public school children.

The Climax-Scotts privatization effort was much different from other notable outsourcing initiatives. School bus privatization attempts in Pinckney, Edmore, and Tecumseh were shaken by the often vociferous opposition of bus drivers, unions, and some parents. In Climax-Scotts, however, comparatively little rancor existed between the parties involved.

What was the key to a peaceful transition from public to private busing in Climax-Scotts? Cooperation, communication, and the mutual desire to do what was best for the children and community.

In January 1994, Climax-Scotts Superintendent Pete Lazaroff became intrigued by the potential benefits of school bus privatization. After discussing the concept with four respected school bus companies, Lazaroff designed and presented a transportation outsourcing plan to the Board of Education’s Personnel and Finance committee. In late May of that year, the committee gave Superintendent Lazaroff approval to publicly investigate the possibility of privatization.

Lazaroff began his investigation by encouraging a culture of cooperation with those who would be impacted by privatization. He did this by assembling a committee of school bus drivers and other interested parties, such as the Climax-Scotts Bus Drivers’ Association (the recognized union bargaining unit), to help him research private school bus transportation. Janice Gose, former supervisor of Climax-Scotts transportation has reported great success in this team approach to privatization. "I was very grateful for the openness displayed by the district. Not only did they avoid surprising us, they asked if we’d participate."

Positive privatization was facilitated by the extreme professionalism of district bus drivers.

Communication was also important to the success of this privatization effort. Brochures explaining the district’s intentions were mailed to local residents. Throughout the entire privatization process, articles were placed in local newspapers and the school district newsletter. In addition, two community meetings provided a forum for the private firms, the superintendent, bus drivers, and the general public to air concerns or criticism about the cost saving plan.

The district received two proposals from private bus companies in November 1994. The committee developed questions for each company and asked to meet with the firms’ executives.

Shortly thereafter, the committee recommended unanimously that the district enter a five-year agreement with Laidlaw Transit to provide transportation services. Lazaroff reports that the district may save $90,000 over the life of the contract, with potential ten-year savings of over $471,000.

Since the district entered into this agreement, a smooth transition from public to private school bus transportation has taken place. In addition, thanks to the Laidlaw contract, Climax-Scotts was able to begin the new school year with seven brand new buses.

Constant and open communication with all stakeholders has allowed for what Superintendent Lazaroff calls "positive privatization," whereby a win-win situation is created so that all parties benefit from the transaction. Lazaroff noted that positive privatization was facilitated by the extreme professionalism of district bus drivers. "Their willingness to look at the general welfare of the district and its students allowed for a peaceful, positive conversion of school bus transportation services," said Lazaroff.

That spirit remains today. According to Laidlaw employee Janice Gose, "I appreciated the willingness to work together in a fashion that would benefit the students, drivers, and school district alike." She continued, "I have no qualms with Laidlaw. They have kept their word and I am very happy with them."