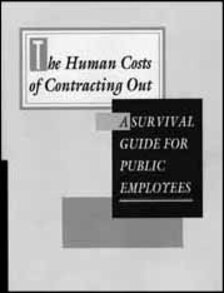 The AFL-CIO's manual for combating privatization.

It’s no secret that labor union leaders are opposed to privatization.

As Democratic and Republican party leaders embrace privatization as a bridge to more effective and efficient government, organized labor has developed observable, well-organized, and sophisticated strategies for impeding such efforts. Techniques can include demonstrations, work disruptions, lawsuits, funding of political campaigns, and the encouragement of "living wage" ordinances. By these methods, often funded by compulsory dues money, labor unions attempt to influence public opinion and policy.

Despite the AFL-CIO's official opposition to contracting out, affiliates such as the International Brotherhood of Electrical Workers 665 in Lansing, Michigan, contract out for janitorial services--with nonunion labor.

Another technique, however, is more subtle and perhaps more effective: one-sided information.

The American Federation of Labor-Congress of Industrial Organizations (AFL-CIO) is very active in opposing privatization. One way it works to limit successful privatization is with "informational" campaigns targeted at workers.

The union’s most notable effort is the 1993 publication, The Human Costs of Contracting Out: A Survival Guide For Public Employees, (formerly known as America Not For Sale). Published by the AFL-CIO Public Employee Department, the study makes its mission clear early on: "It’s [sic] purpose, plain and simple, is to help you prevent, defeat or reverse decisions by your employer to contract-out work."

The 59-page guide is a "how-to" booklet for defeating privatization. It criticizes private companies which contract with government as it explains trends in contracting, privatization’s legal barriers, and lessons in conducting public antiprivatization campaigns. They include "tips for dealing with reporters" and advice on the design of antiprivatization fliers.

The guide also provides a sample newspaper editorial, as well as a list of companies that bid on government contracts, such as Laidlaw Transportation, Marriott Corporation, and Wackenhut Services. Another list of organizations includes what the guide refers to as "think tanks and their rich patrons." Among them are respected research institutions including the Washington, D.C.-based Cato Institute, the Los Angeles-based Reason Foundation, and the "Mackinaw [sic] Center," of Midland, Michigan.

The Human Costs guide and Privatization Update represent two bullets in just one union’s antiprivatization arsenal, but most of these techniques and tools are widely shared by labor unions.

Organized labor’s opposition to privatization has important public relations implications. Antiprivatization techniques can be distributed quickly through labor union networks. This gives the appearance of a "one voice" challenge to privatization, which can cause proprivatization arguments raised by citizens and officials to be lost in a cacophony of opposition by a small minority of activists.

The preface of the AFL-CIO guide ends with a sweeping condemnation of privatization’s most popular technique: outsourcing. "Contracting out work to non-union, temporary, and part-time workers is taking place in both the public and private sectors with equally disastrous effects on career workers, their unions, and the ability of the American work force to perform their [sic] jobs."

The International Brotherhood of Electrical Workers Local 665 and Sheet Metal Workers Local 7 (both AFL-CIO affiliates) in Lansing, Michigan, do not appear to be hindered by the "disastrous effects" of outsourcing as they contract out with nonunion janitorial services.

The message from AFL-CIO headquarters and union leaders seems to be, "It’s OK to outsource if it helps us, but you must oppose outsourcing if it helps those with whom we bargain."

Government and labor unions are proving what hundreds of antiprivatization guides cannot refute: Outsourcing works. If it did not save labor unions money, they would not do it. And that is information they can take to the bank.