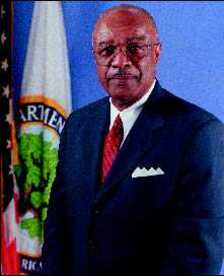 President George Bush's appointment of Roderick Paige as the seventh U.S. Secretary of Education was applauded by education reform proponents and the public school establishment alike.

Paige, a committed public education advocate who supports the president's plan for standardized testing and increased federal funding for education, was easily confirmed by the Senate on Jan. 20.

But the new secretary is best known for his work as a member of the Houston Independent School District (HISD) Board of Education, and later as HISD superintendent.

As a board member from 1989 to 1994, Paige left his mark on HISD. He co-authored the school board's Declaration of Beliefs and Visions, a statement that called for dramatic reform and a commitment to decentralization, accountability, and the development of a core curriculum. This document became the foundation for a dynamic restructuring of HISD, which included outsourcing school services; incorporating input from business, religious, civic, and other leaders into school reform plans; and allowing principals more autonomy to run their schools. Reforms also included performance-based pay plans for principals, administrators, and even for Paige himself.

One of his fellow HISD board members, Donald McAdams, described Paige as "the heart and soul of our commitment to school reform." McAdams, in his book "Fighting to Save Our Urban Schools...and Winning! Lessons from Houston," writes that Paige "must have always been an intellectual. He read and seemed to remember everything about education reform. In fact, he seemed to read and remember everything about everything."

Paige explained some of his HISD efforts in a November 2000 Education Week commentary this way:

Some of the courageous decisions [we] have made involved recognizing our limitations. The school district runs the city's largest transportation system, but none of us professional educators knows much about how to keep buses running. Nor do schools of education offer courses in food service, building maintenance, and waste disposal. So we hired people who understand these industries, paid competitive wages, and authorized them to draw up contracts with the best firms they could find. That allowed us to concentrate on what we could do best: educate children.

Paige says the district's efforts to solicit community support and input were "grounded in the conviction that every member of the public is our 'customer,' including people with no children in school and parents who send their children elsewhere or teach them at home."

Paige became the superintendent of HISD in 1994. As superintendent, he expanded school choice by launching a system of charter schools, ended "social promotion," and established programs that encouraged school and student accountability.

In Education Week, Paige explained the district's support of decentralization: "We understand that the real work of a school system is what happens in classrooms and schools. So we decentralized management and made the individual school the basic unit of accountability and improvement."

Urban school officials around the country are praising Paige's appointment as Secretary of Education, and many hope that Paige's commitment to accountability and reform will carry over into his work on a national level.