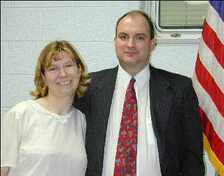 Hazel Park parents Mark and Mary Tierney are happy with their district, but believe greater parental involvement could make it better.

Mark and Mary Tierney, parents of four children in Hazel Park schools, thought they were merely becoming more involved in their children's education. They never anticipated the response they received from school and union officials when they proposed, in December, that their district allow parents to have a role in evaluating teachers.

"It's surprising that someone would suggest we give power for evaluating teacher performance to people we cannot hold accountable," said Mary Ann Ochab, president of the Hazel Park Education Association (HPEA).

The Tierneys have been active parents in their local school district, participating in school events and keeping up with changes in curriculum and administration. Mrs. Tierney, currently a college student studying social work, is president of a local school's Parent-Teacher Association (PTA).

Though the Tierneys are satisfied with the education their children receive at Hazel Park schools, they say the district "can always seek ways to improve."

Their idea for allowing parents to evaluate teachers by means of a survey came from a discussion of school choice in one of Mrs. Tierney's classes. The Tierneys proposed ways the Hazel Park school district could make itself more competitive with surrounding schools in order to lure back students who had left the district through the state's schools-of-choice program.

The problem is serious. Hazel Park Superintendent James Anker recently told The (Oakland) Daily Tribune, "We lost 357 students over the past three years. Basically they have left the district. I don't really know why."

Overall, Hazel Park schools have lost 475 students since 1994, many going to other districts in search of better schools.

The Tierneys believe that schools must be responsive to parental concerns to remain competitive. They considered ways businesses and other organizations serve customers and developed a proposal that incorporated these ideas.

The proposal included a model survey for parents, based on research Mr. Tierney had conducted on other school districts around the country that encourage parental input. His survey asks parents to rate the accuracy of statements such as "my child's teacher is available and responds when I call or want to meet" and "the teacher contacts me promptly with concerns about my child's academic or behavior performance."

In the proposal, the Tierneys also included a provision that would allow parental surveys to count for 15 percent of a teacher's yearly evaluation. If a teacher had high marks with parents, this could lead to a financial bonus for that teacher.

Mr. Tierney presented his proposal to the Hazel Park school board in December, at a regularly scheduled meeting. Although the board unanimously voted to form a special committee to consider the proposal, controversy erupted.

It was immediately labeled a "merit-pay" issue by school board members and others opposed to the idea- a term that has been demonized in the teaching community- and highlighted as such in news reports in the Detroit Free Press, Detroit News, and other local papers.

This drew immediate fire from state and local teachers' unions. Calvin Mott, a regional representative for the Michigan Education Association (MEA) told the Detroit News the proposal was "troubling."

"We should not allow lay people who have not had training on teacher evaluations to help decide whether a teacher receives a pay increase," he said.

The Tierneys say the idea of a financial bonus for a high teacher evaluation rating was not the central point of their proposal. They argued that parents should have a greater voice in their children's education, and evaluating teachers was just one way it could be accomplished.

Mark and Mary Tierney approached their community in search of support for their plan. They went door-to-door around Hazel Park, showing people their survey and asking them to sign a public opinion petition in support of the plan. In a few nights they came up with more than 400 signatures; approximately 80 percent of the people they approached signed the petition.

On Feb. 28, the district held a hearing to discuss the proposal. Although those in charge of the meeting had promised to include parents, Mr. Tierney was the only parent allowed to speak who was not a member of the school employees' union or a school official.

The meeting's facilitator, Assistant Superintendent Victor Mayo, also refused to let the meeting be taped by the Tierneys or any other parent in attendance-even though it had been advertised as a public meeting. Mayo held a vote of union members on whether or not the meeting should be taped, though Michigan's Open Meetings Act requires that all public meetings allow both taping and public input. The union members voted against allowing the meeting to be recorded.

Only one other person, Clark Elementary School Principal Michael Barlow, spoke in support of a parental survey, offering his own version that would include questions about school programs and extensive comment sections for parents to write suggestions.

During the meeting, Mr. Tierney told the assembled educators, "We have a good school system, but we can do better, raise our standards. This survey will help us find the 'pulse' of the community. Parents shouldn't have to jump through hoops and cut through bureaucracy to have a voice. If we improve, children stay, and we win."

In response, both HPEA's Ochab and the MEA's Mott pointed out that Tierney's bonus pay option is prevented by the union contract with teachers and would have to be bargained into next year's contract in order to become effective. Both said they opposed merit pay and thought the district was already doing enough to solicit parent input.

Mayo abruptly ended the meeting and said the group would reconvene at the end of March to discuss the two proposed surveys and decide whether or not to proceed. Ochab agreed to convene a special committee to discuss the issue, but the March meeting was postponed indefinitely while the union solidified its recommendation.

"We'll do the best we can, but we certainly can't move mountains," Ochab said.

Following the meeting, a number of parents voiced concern that participants appeared to be "stonewalling" the idea of surveying parents' opinions.

The Tierneys say their experience has taught them a lesson in school politics. Despite consistent talk about increasing parental involvement, the Tierneys believe the opposition to their suggestions shows that parents are "held at arm's-length" from their children's schools.

"You've got parents who feel there's this invisible wall that separates them from their kids' schools. We need to break through that wall. I was hoping this proposal would make that happen," Mark says.

He is currently speaking with board members and parents to offer support for the survey idea at the next meeting, whenever it is scheduled.

The Tierneys say they are willing to drop the bonus pay portion of their proposal, which accounted for 15 percent of a teacher's evaluation, if that's what it takes to get the parents' voices heard. But they believe bonus pay could be an option in the future to inspire teachers and schools to improve.