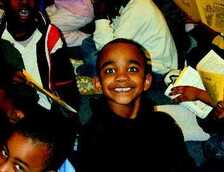 Enrollment at Inkster public schools is up for the first time in years after Edison Schools, a private educational management company, was hired to run the district. Students and parents seem to be pleased with recent changes in the district's schools.

To some observers, private educational management organizations are a blessing to public education, bringing much-needed innovation and improvement to the struggling schools they're increasingly being hired to run.

To others, the for-profit companies are a source of controversy and consternation, uncaring corporations willing to sacrifice educational progress for the sake of their bottom lines.

What is the truth about these organizations, which—as readily admitted by both advocates and critic—are playing an ever-larger role in public education today? Perhaps the best way to answer that question is to look more closely at what they are and what they do.

Edison Schools, the best known educational management organization in the United States, currently operates over 25 schools in Michigan and 113 schools across the country that serve more than 57,000 students. In Michigan, Edison is best known for assuming operation of the Inkster public school district and offering to reform some of Detroit's worst public schools.

Edison has faced intense opposition in its efforts to manage schools across the country. Currently in San Francisco a local school board is attempting to revoke a contract with Edison which allowed the company to operate an elementary school. The board claims Edison has not lived up to its promises and may be discriminating against students. Edison firmly denies the charges.

In New York City, Edison recently lost a vote that would have allowed the company to manage five of the city's poorly performing schools. Much of the opposition to the proposal came from the local teacher unions, which vehemently campaigned against Edison. The unions oppose added demands that Edison may have made on teachers, such as longer school days. 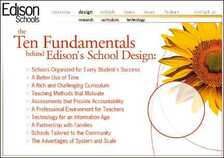 Edison also faced criticism recently in Michigan with the release of a Western Michigan University (WMU) study, funded by the National Education Association, the country's largest teachers' union and a vocal opponent of charter schools and educational management companies. The WMU study said that Edison was no more successful at boosting student achievement than the districts that hired the company.

The study conceded that Edison students show improvement gains from year to year on standardized tests, but claimed that Edison-run schools do not perform as well as the company advertises.

John Chubb, chief education officer and executive vice president for Edison, told the Detroit Free Press the study is "a biased report that was set up from the start to criticize Edison Schools." Chubb also told the Free Press that the study was unscientific and the data used were old and incomplete.

Despite the intense opposition to Edison, few people know how Edison Schools started, how it operates, and why it's looked to as a leader in education reform.

Chris Whittle, an entrepreneur with over 25 years of experience in the education and publishing fields, founded Edison Schools in 1992. For three years, Whittle, along with a team of education researchers, teachers, school administrators, and curriculum developers, conducted extensive research and developed a design for innovative schools that could operate at public school spending levels.

Edison's researchers traveled the world to visit the best schools, meet with education experts, and review vast volumes of research on education, from curriculum building to school finance. The product of this research was a dynamic model for Edison Schools, incorporating what the company deems the most effective administrative and teaching practices with the best learning environment and curriculum. Edison's team designed a school model to serve students, parents, and the community at large by instituting schedules, programs, and technologies that would encourage parental involvement and help connect community groups and resources to families.

Using 10 fundamental principles as a guide, Edison instituted many practices it has become famous for, such as a longer school year, before- and after-school opportunities for students, professional development time each day for teachers, portable computers for students and teachers, and "learning contracts" between parents and teachers.

After the model was developed, Edison began opening its first schools in 1995. The number of Edison-run schools across the country has grown rapidly in every subsequent year. Edison implements its school design in traditional public schools, which the company operates under management contracts with local school districts, and charter schools.

Edison's school design incorporates a number of accountability measures to ensure children are learning basic skills and performing at their potential. One of the measures Edison has in place is a "Benchmark Assessment" system, allowing teachers to use standardized tests to monitor student progress every few months. Edison schools also participate in state and national assessment tests.

Despite enrolling a high percentage of disadvantaged students who struggled in traditional schools, Edison-run schools are posting achievement gains on state and national assessments. On average, Edison reports that students are moving up 7 percentile points per year on state assessment tests; and, since opening, 85 percent of Edison-run schools have posted positive achievement trends.

Perhaps the most notable accountability measure in Edison schools is the Quarterly Learning Contract. The contract is an agreement between a student, the parents of that student, and the student's teachers. It defines each person's responsibilities in the educational process. The contracts allow each student to have a personalized education plan that focuses on individual areas of greatest need. Contracts include a specific goal established for a student each quarter, such as improving reading skills. Tasks to be performed in achieving the goal are also listed in the contract and the student, parents, and teacher sign the contract.

Quarterly Learning Contracts are one of the many changes made in Inkster schools last year, when Edison took over. Going into the 1999-2000 school year, the suburban Detroit district was facing dismally low graduation rates, a burgeoning deficit, and alarming enrollment losses due to students taking advantage of Michigan's schools-of-choice program.

When the state threatened to take over the district, the school board became willing to consider a new approach to its problems: contracting the daily operation of Inkster schools to Edison, in the hope that the company could turn things around.

The Inkster school board voted to contract with Edison in February 2000. By September, Edison had assumed operation of the entire district. Edison-Inkster Superintendent Terry Ann Boguth says so far the results have been more than encouraging.

"Since last year [when the contract with Edison was announced], enrollment has increased 15 percent, the first enrollment increase in 10 years," Boguth told Michigan Education Report .

Part of Edison's plan for Inkster is to directly assess which subject areas need the most work and focus the educational program on fixing these. Edison is requiring Inkster parents, students, and teachers to sign Quarterly Learning Contracts, which, along with narrative report cards, allow teachers to provide ongoing written input on a student's progress rather than just a letter grade. Boguth says the contracts encourage each party in the educational process to "commit to responsibilities."

Included in Edison's five-year contract with Inkster is a guarantee that the number of students who achieve passing reading and math scores on the MEAP test will increase by 3 percent in the first year, with a yearly improvement rate of 5 percent each year after that. It also guarantees that MEAP scores in other subject areas will increase by a total of 10 percent by the end of the five-year contract period.

Edison-Inkster also has implemented a longer school day and school year for the district. Depending on their grade, students attend school seven or eight hours per day, and students are in school three days longer than the typical school year.

Inkster teachers are unhappy with this reform, "The day is too long for all of us, and it really doesn't accomplish much," Geneva Lyles, a science teacher at Inkster Middle School and Inkster Federation of Teachers union representative, recently told the Detroit News. "We lose the students at the end of the day."

But Edison's teacher training initiative is one of the best improvements made thus far, according to Boguth. The district provides ongoing teacher training through professional development seminars and technology training. All Edison-Inkster teachers have their own laptop computers and are regularly trained on new ways to integrate technology into classroom activities.

Edison-Inkster also plans to provide students in third grade and above with a home computer to allow access to homework on the Internet and to encourage parents to maintain constant contact with teachers via e-mail. Boguth says changes in curriculum will focus on improving reading skills and introducing foreign languages in elementary school classes.

Despite the changes that have been made in Inkster's schools, the district still may face state takeover, due to problems with its elected school board. The Detroit Free Press recently reported that Inkster's school board has broken the contract with Edison by acting in a "financially irresponsible" manner.

In taking over the district, Edison agreed to eliminate Inkster's $1.9-million deficit, and expected board support for future cost-saving measures. But the Free Press investigation shows that Inkster school board members cost the district $66,000 by refusing to approve a contract with an outside vendor to provide food services to Inkster schools.

According to the Free Press, board members also spent over $10,000 in travel expenses for out-of-state education conferences, despite a district moratorium on out-of-state travel, and refused to document many of the expenditures with receipts. The Free Press investigation also found that, of the receipts submitted for school board members' trips, many were for lavishly high-priced meals and other questionable expenses.

Despite these and other negative developments, Inkster School Board President John T. Rucker, in a recent newsletter, commended the improvements Edison has made in the district and mentioned the board's commitment to saving money.

"We are dedicated to continuing the improvement of Inkster Public Schools.... We accept our obligation to be fiscally responsible and are continuing to seek new ways to operate our schools more economically," Rucker wrote.

State officials will interfere with the district only if problems continue with the school board, or if Edison requests state assistance.

Despite the debate over Edison's involvement and success in education, the rapid growth of Edison Schools and the company's innovative programs seem to have encouraged parents, teachers, and school districts to consider options beyond the traditional model for public education. Educational management companies such as Edison are becoming more prevalent and are drawing support from parents and activists looking for bolder reform ideas in education.

For more information on Edison Schools, visit the company's web site at www.edisonschools.com.