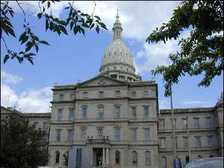 The 2000 campaign season was filled with promises for education reform, which consistently tops the list of most important issues to voters. How likely is it that Michigan will see any follow-through on education reform by state legislators in Lansing and the new administration in Washington?

Here in Michigan, one of the biggest question marks is whether the current cap on the number of charter schools that can be sponsored by universities will be raised to meet an ever-increasing demand. In the Legislature's last session, the House of Representatives failed to pass a bill that would have raised the cap, which stands at 150 university-sponsored schools. 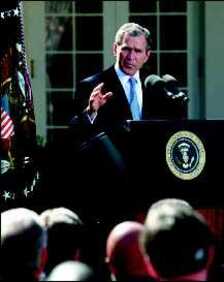 President George W. Bush's education plan is being criticized by both anti-school choice groups as well as organizations who fear further federal intrusion into the local control of schools.

Republicans generally support charters, and Republicans have control of Michigan's House and Senate by wide margins. So why the logjam?

The 157,000-member Michigan Education Association is the state's largest school employee labor union and a powerful lobbying force in Lansing. It strongly opposes charters and other forms of school choice and has succeeded so far in keeping lawmakers from expanding the scope of a reform many Michigan parents want. Senate Majority Leader Dan DeGrow, R-Port Huron, says the best hope right now is for raising the charter cap in school districts judged as "failing."

But the trouble comes with how to define what constitutes failure. That is something the Senate will have to decide in order to establish a standard for deciding whether and when the state should intervene in the affairs of a school district, as it did in 1999 in the case of Detroit Public Schools.

Legislators held three public hearings in February to hear testimony from educators, parents, and other citizens on how the "failure standard" should be drawn. While some said MEAP scores should be the determining factor and some said graduation rates--or both--others expressed concern that the state's attempt to codify failure is misguided.

Matthew Brouillette, director of education policy at the Mackinac Center for Public Policy, told the committee to approach the problem from a different angle.

"Each child is a unique individual-what works for one may not work for another," he added. "Therefore, the most appropriate definition of a 'failing district' is one where parents cannot choose what is best for their children."

The hearings were held in part as a response to intense criticism of the Legislature's attempt to take over Benton Harbor's schools, an attempt which critics said did not apply the same standards as were applied to Detroit schools.

The Senate Education Committee is expected to draft a bill addressing the issue of failing schools for submission to the full Senate by the end of April.

Meanwhile, in Washington, D.C., President Bush is promoting an education plan many expected to relinquish aspects of federal control over education to states. Instead, the president's plan seeks to increase federal funding and direction for education through myriad initiatives.

Bush's proposal includes a measure to establish a federal school choice fund, which would allow the Secretary of Education to research, develop, and disseminate information on innovative school choice programs.

The Bush plan also offers a provision to allow public schools to evolve into charter schools. The provision would let states or individual school districts enter into a charter agreement with the Secretary of Education. As with all charter schools, this arrangement would allow officials more autonomy in financial matters, staffing, and curriculum, with fewer state and federal regulations. Parents would have more choices as to which school their children could attend, and schools could attract parents by setting and meeting performance goals.

Along with his education plan, Bush proposed a $1.6 billion, 8-percent increase in federal funding for K-12 education, as part of an overall $4.6 billion spending boost for the U.S. Department of Education.

Critics of the president's plan include teachers' unions-which oppose the voucher and school choice initiatives-and other groups that warn against a greater federal role in education.

The Mackinac Center's Matthew Brouillette recently told CNS News that Bush "probably doesn't see the long-term impact of involving the federal government [more in education]. Despite what might be laudable efforts to implement more market incentives into the public system from the federal level, this is just a usurpation of power that belongs to the states."

Congress has yet to consider Bush's proposal. But the Senate Health, Education, Labor, and Pensions Committee did recently review the plan, naming it the "Better Education for Students and Teachers (BEST) Act." The committee approved most of Bush's initiatives, including a $5 billion increase in funding for reading programs, but removed the voucher component in an attempt to avoid controversial issues and partisan conflict.

The U.S. House Committee on Education and the Workforce also recently proposed an education bill that mirrors Bush's plan. The bill, titled the "No Child Left Behind Act" of 2001, was sponsored by Committee Chairman John Boehner, R-Ohio, and more than 70 original co-sponsors.

It includes many of the measures contained in Bush's original education proposal including assessment testing, and a provision to provide school vouchers to children in failing and "unsafe" schools. The bill also provides immunity from federal liability for teachers and other school officials who "engage in reasonable actions to maintain school discipline" and ensure school safety.

"H.R. 1 will give students a chance, parents a choice, and schools a charge to be the best in the world," Boehner said. "The hard lesson of the past is that money alone cannot be the vehicle for change in our schools. If our goal truly is to leave no child behind, there must be accountability for results."

The House and Senate are likely to form a joint committee to hammer out the details of the final combined education plan.

Republicans say they will fight for the voucher option when the final education plan heads to the House and Senate floors, but Democrats believe they have the votes to defeat it.