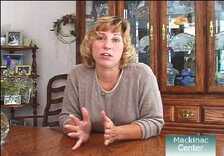 Arvon Township school board president Mary Rogala tells an interviewer of her fight with a local union over budget priorities for her tiny, 10-student district. See the six-minute video at www.mackinac.org.

Over 50 legislative staffers, policy-makers, and education reformers crowded into a Lansing restaurant March 15 to lunch and listen as a school board president told of her clash with the Michigan Education Association (MEA) over reforms designed to boost classroom spending.

Mary Rogala of the Arvon Township Public Schools Board of Education described the threats, lawsuits, and intimidation tactics that characterized the district's contract negotiations last summer.

Declining enrollment at Arvon, a tiny 10-student district in the Upper Peninsula, forced the five-member volunteer school board to examine ways to better spend Arvon's $260,000 annual budget, over $100,000 of which was being used on the transportation, food, and janitorial services provided by five unionized district employees.

"It was costing us eleven dollars per child per day to serve lunch," Rogala told the audience. "That's the price of a good steak dinner at Tony's steak house."

The Arvon Board of Education proposed a "School Excellence Plan" that would save the district over 30 percent on the cost of non-instructional services by contracting those services out to private providers, while still allowing district employees to work in the district if they chose to do so. The resulting savings would be used to fund a new $20,000 science, music, art, foreign language, and technology program. Board members were unanimously in favor of this plan, said Rogala.

Then the trouble began. "The union did everything it could to prevent us from going through with the School Excellence Plan," Rogala said. "The MEA served us with numerous grievances and an order to appear in court."

The union publicly stated that it believed private service providers couldn't do as good a job as unionized employees, even though many Michigan school districts have improved service quality and saved education dollars by contracting out, said Rogala.

After the board approved the plan by a 3-to-2 vote, one board member called a special meeting to rescind his yes vote following a series of threats against his person and business, Rogala said. The plan's defeat led to the scrapping of the $20,000 educational program and the reduction of the school library fund down from $5,000 to $300.

"The MEA has adopted the reactionary position that outsourcing is never a good option for public schools, even when it can be shown to provide substantial savings for the district," Mackinac Center Senior Vice President Joseph Overton said in his introduction of Rogala at the Lansing speech.

The MEA's position is ironic in light of the union's outsourcing of custodial, mailing, security, and cafeteria services at its East Lansing headquarters, said Overton.

The audience included representatives from the MEA, attorneys from its law firm, and officials from its insurance affiliate, the Michigan Education Special Services Asssociation (MESSA).

During a question-and-answer period, Rogala listened as Tom Baird, an MEA attorney, disputed her story. Baird's law firm filed numerous lawsuits against the Arvon school board during the ordeal, accusing the district of violating labor practices by considering outsourcing and hiring a teacher to serve as an administrator.

The MEA "is willing to cooperate with the board and consider positive changes," Baird said, but wished the board had not held meetings over the summer, when most people are on vacation.