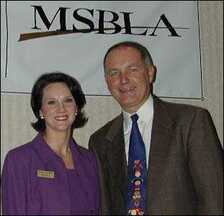 On March 15, U.S. Congressman Pete Hoekstra, R-Holland, and Michigan Board of Education Secretary Mike Warren, Jr. addressed more than 150 school board members, legislators, education reform leaders, and parents at the second anniversary of the Michigan School Board Leaders Association (MSBLA).

Attendees packed the Lansing Sheraton Hotel's banquet room to celebrate the nation's only organization for school board members from public, charter, and private schools. Members have adopted the motto: "School board members are not elected to serve schools; they are elected to ensure that schools serve children and parents."

Congressman Hoekstra encouraged everyone to continue the fight for parental control over education.

"One-third of our kids graduate and still need remedial education. We have a very backward system where we pay and reward people for failure," Hoekstra said. "[We need to] create an environment that is more favorable to choice and puts dollars into the hands of parents. We want to empower parents, local schools, and local school boards. Let the individuals who know the names of our kids decide how to use the money."

Board of Education Secretary Mike Warren also called for choice in education and said technology has tremendously changed the educational landscape.

"The concept of the 'school' is changing," Warren told the audience. "It's the information age; you can learn in your home. It's time to break up the monopoly. It's time to focus on kids, not schools. We need full choice and full disclosure."

The theme of the evening was a focus on children and the American Dream. The Knapp Knight Singers—students from a local charter school—sang the national anthem and a patriotic medley, and one family with six home-schooled children recited a poem.

MSBLA Executive Director Lori Yaklin remarked that the organization has grown above and beyond anyone's expectations, bringing together public, charter, private, and home school leaders from around the state to advance choice in education.

"Tonight we celebrate the fact that, as Americans, we have the freedom to achieve our dreams, yet we mourn for the many children whose lack of a quality education stifles their opportunities," Yaklin said. "MSBLA was created two years ago with these children in mind."

She said MSBLA's goal was to improve education for all children through the traditionally American ideas of freedom, competition, and choice, adding that "an educated populace is necessary to create and preserve prosperity and liberty."

MSBLA Chairman and Founder Tom Bowles, who recently retired from the Van Buren board of education, also addressed the audience, offering a defense of educational choice and exhorting reform advocates to continue their work in this area.

Three individuals were recognized for their efforts to improve education for Michigan children.

Chairman and founder of National Heritage Academies J.C. Huizenga was honored with the "Visionary Award" for his founding and support of 22 charter schools in Michigan and five others around the country.

Arvon Township Board of Education members Mary Rogala and Jim Harden were presented with "Courage in Leadership" Awards. Rogala and Harden were honored for their crusade to save their tiny, 10-student district from a financial crisis in the face of union efforts to thwart education reform.