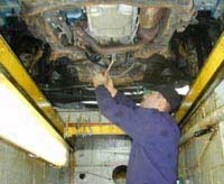 The city of Detroit now saves $750,000 per year thanks to privatization through a contract with a private oil change company.

In 1997, nearly four years after he left office, former Detroit Mayor and staunch privatization opponent Coleman Young surprised many when he suggested that one of the city's services might save money if it were contracted out to a private firm. He said the city could realize substantial savings if it contracted with Urban Management Corporation, a company for which Young served on the Board of Directors, to change oil in city police cars.

The city followed Young's advice. Has it saved money?

It could hardly fail to do so. While Detroit's Department of Public Works (DPW) never advertised its oil-change costs, some of its cost information can be easily deduced from published reports. The picture one can draw fits right in with other Detroit boondoggles uncovered in recent years-mismanagement in the public school bureaucracy, building and safety inspections, the Department of Transportation, etc.

According to The Detroit News, DPW charged about $1 million in 1997 to change the oil in 500 police cars for one year. Each change commonly takes an officer and his car out of service for up to 45 minutes. Slower service notwithstanding, if DPW is at least as efficient as private garages, an oil change should cost around $30.

Assuming a $30 per DPW oil change, $1 million worth of oil changes for 500 police cars buys about 67 oil changes per car per year-that's one for each car every 5 or 6 days, on average. To need that many oil changes in so short a time, the police cars would each have to be running 200,000 miles per year.

To drive that many miles in a year, each car must be moving, on average, just under 23 miles per hour, 24 hours per day, seven days per week. That allows no stopping to catch crooks, no sitting at traffic lights, and no time for oil changes.

Obviously, DPW was not running a smooth, efficient oil-change operation. What's more, the fact that expenses were so far out of whack was apparently common knowledge-so much so that even privatization opponents like Young felt safe in proposing a private contract. It is therefore little wonder that Detroit officials found the former mayor's offer appealing and contracted with his group to provide the maintenance for city police vehicles.

The city quietly gave Young and his business associates the contract. Young, now deceased, said his proposal would save the city nearly $700,000 of the $1 million yearly cost of changing the oil in its 500 police cars-a 70 percent savings. Officials from Urban Management indicated that the savings would come from a quicker oil changing technique that could be performed at 13 individual police precincts instead of at the current single Department of Public Works (DPW) location.

The contract, now being carried out by On Site Oil, which bought Urban Management Corporation in 1998, stipulates that Detroit will pay a per-car cost for maintenance of $32.95. The price is higher for trucks and vans. The contract is limited to 7,325 oil changes annually.

In exchange for these fees Urban Management agreed to drain and replace up to five quarts of oil; provide new oil filters; lubricate each car's chassis; maintain and fill radiator coolant, brake fluid, transmission fluid, and windshield washer fluid; and conduct a general inspection of hoses, belts, and air filters on every vehicle.

The contract, signed in November 1997, had four major objectives:

 To develop a computerized system to schedule and track police vehicles for routine maintenance in accordance with time periods and mileage levels established by the city of Detroit, Vehicle Management Division of the Department of Public Works;

 To provide routine on-site maintenance services to police vehicles at police precincts so designated by the Vehicle Management Division of the Department of Public Works;

 To provide transportation for all personnel, supplies, and equipment to be used in the servicing of the vehicles to and from the police precincts; and

 To dispose of all items used in the servicing of the vehicles (oil, etc.) using methods that comply with local, state, and federal requirements.

What are the results? For the computerized system and services involved in the first objective, the city was to pay Urban Management $17,000. For all other services the city agreed to pay "a maximum not to exceed" $242,208. This price represents a 75-percent drop in the price paid by the city of Detroit to change the oil in its police cars. And the savings are even greater when one considers that the company must return a portion of this money back to the city in the form of income tax. The contract with Urban Management and On Site Oil has saved Detroit at least $750,000 annually since it was implemented.

Probably no one knows how many other city services are being similarly mismanaged and could save vast amounts of money through private contracts. Imagine what the city might save if it contracted out every other DPW operation.

Michael LaFaive is managing editor of

Joseph Lehman is executive vice president of the Mackinac Center for Public Policy.