Faulty School Bus Privatization Can Take Districts for a Ride 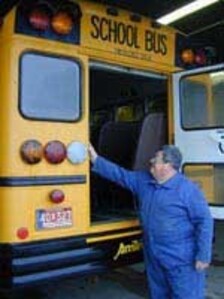 A state school bus inspector examines the latch on a public school bus. A recent analysis of state records by the Detroit Free Press suggests that public school buses are passing safety inspections at a higher rate except in the city of Detroit.

Detroit-area parents who trust private school busing companies with the safety of their children each school day got a rude surprise recently. The results of a survey by the Detroit Free Press, published on Nov. 14, 2000, found that private bus firms hired by local school districts failed state inspections at a rate higher than that of their public-sector rivals.

Even though Detroit Public Schools buses were the worst—these buses failed inspections more often than their privately operated counterparts—the situation was serious enough to generate negative publicity for private firms.

Yet, privatization is just like anything else: It doesn't work well unless it is handled correctly.

The survey—involving Macomb, Oakland, Wayne, Livingston, and Washtenaw counties—was based upon records kept by the state police department responsible for school bus safety inspections. The Free Press found that of 801 buses operated by private contractors in the five counties, only 492, or 61 percent, passed inspection. Buses that were actually owned by private schools performed only slightly better, with 65 percent of 140 buses passing. This is well below the 86-percent passing rate of the 4,017 publicly owned and operated buses serving public schools in the same region.

Of the 22 contractual arrangements in which private companies were employed to transport school children, only three received passing grades for the entire fleet of buses. Six had a zero pass rate—not one of their buses passed inspection.

When privatization is carried out without proper attention to performance standards—without explaining clearly and in detail what a contractor should do, how success will be measured, and making those terms a condition of the contract—no one should wonder when a privatization plan doesn't work.

Having clear performance objectives and standards written as conditions of the contract is the only way to ensure that contractors—who have a profit—based incentive to keep costs as low as possible-don't cut too many corners. For example, a pre-emptive safety clause written into a busing contract might read, "district reserves the right to revoke contract if more than 15 percent of a contractor's bus fleet fails state safety inspection." Such an incentive would keep a contractor on its maintenance toes. While district contracts do have performance objectives, they are apparently not stringent enough—a condition that may be remedied as a result of publicity from the Detroit Free Press survey.

Moreover, a contract admin-istrator's job does not end when the deal is struck. The performance of contractors must be monitored. Indeed, in a Mackinac Center for Public Policy/Reason Foundation study on designing bidding and monitoring systems for privatization contracts, author John Rehfus writes that without monitoring a contract, "there is no way of knowing whether the contractor's work is faithful to the contract terms or whether or not citizens and agency officials are satisfied with the service."

While this may seem like common sense, it is a point that often eludes contract administrators. According to Rehfus, a comprehensive monitoring system should incorporate three components: contractor reports, inspections, and citizen complaints.

Contractor reports must inform the proper authorities of the status of efforts to meet the terms of the contract, including standards and project objectives. Inspections by the contract administrator or his staff, which may be scheduled or not, should be aimed at checking whether the contract's requirements are being fulfilled. Citizen complaints should be formally documented and researched, and when valid, should be taken seriously. On the other hand, contract administrators should be on the lookout for complaints generated by disgruntled employees or their friends and relatives.

Clearly, one of the benefits of privatization is saving money. But those savings should never come at the expense of the safety of school children. Private contractors—and public school employees—must be held to strict standards of safety or risk losing work to someone who will do the job safely.

Michael LaFaive is managing editor of