Make a Toast to Privatization 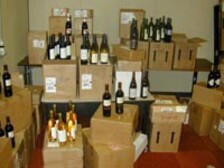 Wine, siezed by state officals, remains locked in a Lansing evidence room. A Prohibition-era law stops the purchase and shipment of wine across the Michigan border unless it complies with a host of state regulations.

Privatization is about taking assets and services that were once a part of government's domain and moving them-in part or whole-into the private sector.

There are many ways to privatize. For instance, the state government may choose to sell one of its parks to private developers to own and manage as they please. Or the state could contract with a private company to manage the park's operation.

Other privatization efforts simply devolve the decision-making process from government officials to people in the private sector. School choice is a good example. Instead of assigning students to schools geographically closest to their homes, vouchers or tax credits let parents decide which school is best for their children.

Eliminating bad laws is another way to devolve decision-making authority to citizens. Take interstate alcohol sales, for example. It's been nearly seven decades since the failed war against alcohol during America's Prohibition period (1920-33) came to an end. But 29 states including Michigan still prosecute a kind of mini-Prohibition of their own: They forbid consumers from buying alcoholic beverages from other states unless the products are shipped through a state-licensed liquor authority.

The Michigan law is a relic from 1934, when states took over the regulation of alcohol sales after Prohibition was repealed. The thought then was that states that want to discourage drinking should have the power to determine the sources of legal beer, wine, and spirits. Whether that made sense then or not, the law today does little more than bestow a monopoly privilege on domestic sellers, raise prices, and limit choices for Michigan consumers.

Imagine if the state passed a law declaring that citizens of Michigan could not buy cherries from producers in any of the other 49 states. Does anyone really believe that it would benefit anyone other than Michigan cherry producers, assuming it could be enforced and that people would pay any attention to it?

Undoubtedly, people who ignore the law transport lots of illegal alcohol from other states into Michigan. Short of searching every car and truck at the borders, the state can't possibly expect to stop the flow. The primary effect of the law is probably to restrict sales over the Internet. If you've ever attempted to purchase wine from one of hundreds of web sites of wineries in other states, you discovered that all but a handful send back a reply, "Sorry, Michigan is not a ship-to state. We can't sell to you." The few exceptions are those that agree to comply with state regulations that do nothing more than jack up the price by about 25 percent.

Of course, Michigan wineries that have web pages can and do sell wine legally over the Internet to Michigan residents.

Defenders of these protectionist laws argue that opening up the market to Internet sales would make it easier for underage minors to get alcohol. James Rodney of Birmingham has a common-sense answer to that: "I really think a minor who wanted a bottle of good wine would find someone to buy it for him instead of using a credit card over the Internet and waiting for delivery at his parents' residence or even a college post office box." Like thousands of Michigan citizens who don't abuse alcohol and would simply like to get an occasional bottle from a favorite out-of-state winery, he wonders what makes the state think its law does any good.

Nonetheless, the Michigan Liquor Control Commission does make an enforcement effort. In a state of nearly 10 million residents, the commission seized more than a hundred packages of illegally shipped beer, wine and liquor in the first 11 months of last year. And it's been fighting a lawsuit filed by Michigan residents who claim the law is unfair and violates the interstate commerce clause of the U. S. Constitution.

No matter what happens in Michigan courts, the state's ban on interstate shipment of alcohol may run afoul of events elsewhere. The Institute for Justice, a Washington, D.C.-based legal advocacy group with a track record of getting special interest legislation thrown off the books, is litigating a challenge to a similar state law in New York. In refusing to dismiss the case last September, a U. S. District Court judge noted that the repeal of Prohibition in 1933 was not intended "to empower states to favor local liquor industries by erecting barriers" to competition. If the case goes all the way to the U. S. Supreme Court, the states may be hard-pressed to defend discriminatory treatment of each other's products in interstate commerce.

Michigan legislators don't need to wait for the courts to work this out. They should recognize the futility of this throwback to Prohibition and strike a blow for choice and competition-by repealing the 1934 law and once again allowing private citizens to make their own decisions.