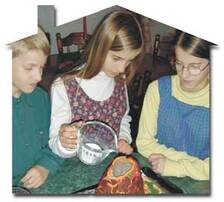 Isaiah, Melissa, and Heather Beerbower of Midland put the finishing touches on their home science project. The state does not track how many students are home-schooled in Michigan, but estimates place the number at over 55,000.

When asked where their school is, an ever-increasing number of American students are replying, "Home."

Nastassja and Nikita Kotlensky are just two of the many thousands of Michigan children for whom home is not just where the heart is, but also where the classroom is.

Their mother, Terry, who recently was featured in The Detroit News, says she began home schooling Nastassja, 11, because public schools weren't meeting her child's needs. She found home schooling to be the best fit for Nastassja and Nikita, 8, allowing each child to pursue individual academic and extracurricular interests.

"It's pretty neat to see your kids explore their interests," Terry told The News. "It's very rewarding to see what their accomplishments are. Nikita's never been to school. She is a grade level ahead. They are not held back by others."

Home schooling is, in fact, "arguably the fastest growing trend in education," according to the Oct. 10, 2000, Christian Science Monitor. Growing at an estimated 15 percent each year, the home schooling population now comprises approximately 3 percent of the U.S. student population, or more than 1.2 million students across the country.

Why is home schooling so popular? Many parents who decide to home school say they do so because they believe they can provide a better education for their children than public or private schools offer. Others voice concerns over school safety and whether the special needs of their children will be met in the typical school setting. Home schooling, they say, gives them an opportunity to tailor curricula to their children's interests, incorporate religious teaching, and closely monitor what their children are learning.

Critics of home schooling raise questions about the competency of parents who are not certified teachers and wonder if children have ample opportunities to "socialize" with others outside of their families.

The home school movement takes these criticisms seriously. Over the years, a variety of local, state, and national associations have popped up to provide support, information, and "socialization" opportunities for home-schooling families like the Kotlenskys. Many of the groups offer curriculum guidance, extracurricular activities, sports leagues, and group classes for home-schooling families. One of Michigan's home-schooling associations, Information Network for Christian Homes (INCH), offers links to dozens of regional home schooling organizations and events on their web site, www.inch.org.

As for home-schooling parents' competency, research suggests that the individualized attention parents are able to give their children and the independence of the home-school academic program seem to overcome the fact that most parents aren't certified teachers. The Washington Times reported earlier this year that home-schooled students scored higher than their traditionally educated peers on the ACT, one of the nation's two major college-entrance exams, for the third year in a row. The average ACT assessment score was 21 nationally, but home-schooled students scored an average of 22.8.

HSLDA research also shows that home schoolers perform well regardless of parents' education levels, household income, or race. In fact, home schooling has been shown to significantly eliminate the disparity between white and minority achievement scores.

Many recent events also have encouraged the home-schooling movement and verified the growing popularity of the practice across the country. This year, the nation's first college for home schoolers, Patrick Henry College, launched classes in Virginia, and the popular Internet retailer Amazon.com announced the creation of an online store for home schooling families.

Although state laws and regulations on home schooling vary, it is currently legal in all 50 states. Some states require home schoolers to register with the state's Department of Education, while others have few regulations on families who choose to home school. Currently, Michigan's home-schooling laws are liberal, leaving parents with complete control over curriculum. Michigan does not require parents to submit proof of teacher certification, attendance, or testing to the Department of Education.

For students and parents in Michigan and across the country, home schooling is becoming an increasingly attractive option. HSLDA provides more information on home-schooling laws, news, and organizations at its web site, www.hslda.org.