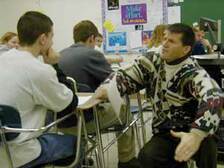 Teacher Frank Dame is glad to again be focusing his undivided attention on his students after winning a lengthy legal battle over his right to resign from the Michigan Education Association.

The commission, which adjudicates disputes among public employees, their unions, and employers, found in December 2000 that West Branch High School teacher Frank Dame had been unlawfully denied his right to resign from the Michigan Education Association (MEA) and its local affiliate, the West Branch/Rose City Education Association.

"This is a victory for all public school teachers in Michigan," says Dame's volunteer legal consultant Robert Hunter of the Mackinac Center for Public Policy. "The MEA must now respect the rights of teachers who wish to resign from the union at the time a resignation request is made."

On April 8, 1998, Dame sent a letter to his local union president, terminating his membership and objecting to the union collection and expenditure of any fee other than Dame's "share of the union's costs of collective bargaining, contract administration and grievance adjustment."

The MEA, citing a provision in the membership application that Dame signed 10 years earlier, refused to accept his resignation because it did not come within the one-month period of each year (August) when members are "allowed" to resign. This meant Dame would have to remain a member of the union and continue underwriting all union activity—including political spending he disagreed with—until August. The union also threatened a collection action for the balance of Dame's dues if he failed to make timely payment.

"I believe that the union was violating my First Amendment rights every day by restricting my right to resign," says Dame, who successfully quit the MEA on Aug. 20, 1998.

About six weeks later, on Oct. 2, Dame filed unfair labor practice charges against the MEA for refusing his April resignation. He contended that the union violated the law not only by denying his resignation but also by failing to adjust his fees downward during that time to reflect his actual nonmember status.

Under U.S. Supreme Court decisions, public unions can charge nonmembers only for the costs of representing them in collective bargaining situations. Other fees for nonrepresentational activities, including political lobbying, are not chargeable to employees who resign their union memberships.

"I've read the resolutions that the MEA endorses, and they didn't speak for my beliefs," Dame told Michigan Education Report in 1998. "I don't want my money used to support some of those positions."

MERC agreed with Dame that the unions (MEA and its West Branch affiliate) violated state law governing collective bargaining when they refused to allow Dame to terminate his union membership. The commission based its finding on the fact that the unions failed to provide Dame with notice of his rights and obligations under both state law as well as the MEA's own constitution and bylaws.

As for his lawsuit, Dame says, "I am extremely pleased that it resulted in bringing a measure of freedom to my fellow teachers who, like me, find themselves trapped in unwanted unions."

For additional information on the impact of this decision and how teachers can exercise their rights to freedom of speech and association, contact the Mackinac Center at (989) 631-0900 or visit www.mackinac.org on the Internet.