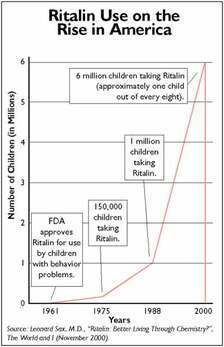 Some parents call it the miracle medication. Growing numbers of teachers swear by it. So perhaps it is no wonder that the drug Ritalin has become the most common treatment for Attention Deficit/Hyperactivity Disorder (ADHD).

For decades, experts and schools have encouraged Ritalin use as necessary for children who otherwise would not succeed in school or possibly even in life because of their disorder. Yet many parents and advocacy groups are increasingly alarmed that there may be a dark side to this "miracle."

With growing controversy over marketing techniques, inappropriate prescriptions, and conflicting research findings, many experts are beginning to worry that the "cure" might be worse than the problem. Increasingly, psychotherapy experts and school reform leaders are calling for a re-examination of how schools rely on Ritalin to manage behavior in the classroom instead of addressing and resolving the underlying problems of students.

ADHD is a psychiatric diagnosis given by many doctors when a child or adult displays difficulty concentrating, paying attention, sitting still, or delaying gratification.

But because most people struggle with these issues from time to time, and because behavioral experts claim that anywhere from 3 to 10 percent of all children display symptoms sufficient to be diagnosed with ADHD, some have worried that the diagnosis itself simply describes the outer edge of normal behavior.

The American Psychiatric Association has published diagnostic criteria for ADHD. The criteria break ADHD down to the most common behaviors present in people with the disorder and then group these into 3 symptom clusters: hyperactivity, impulsivity, and inattention.

Many schools have come to rely on checklists of these symptoms to identify children with ADHD. Serious problems can arise when people move from listing symptoms to making a diagnosis. Due to the vagueness of these symptoms and their common presence in the normal behavior of children, accurate diagnosis is a difficult task requiring professional evaluation.

David Gaffney, a social worker in Saginaw who specializes in ADHD treatment, says that, "ADHD is not actually a disorder but rather is a series of symptoms. There are many conditions-both medical and psychiatric-which can produce those symptoms. Actually, there are many different ADHD conditions, depending on the underlying cause.

"A proper diagnosis requires time and a careful examination of many factors," adds Gaffney. "A checklist of symptoms can be more misleading to a nonprofessional than helpful: It can lead many children to be improperly diagnosed."

The American Academy of Pediatrics agrees, and in May 2000 released a meticulous 13-page set of guidelines for pediatricians to use in evaluating children suspected of having ADHD. This resulted from growing concern that ADHD is being over-diagnosed and Ritalin and other drugs over-prescribed.

But what concerns an increasing number of physicians is not so much the diagnosis as the treatment. Since the 1950s, Ritalin- a powerful stimulant that "shares many of the pharmacological effects of amphetamine, methamphetamine, and cocaine," according to the U.S. Drug Enforcement Agency- has been increasingly used in controlling ADHD symptoms and children's behavior.

While Ritalin definitely decreases hyperactivity and quiets the child, recent studies have cast doubt upon whether it aids learning, as the drug's advocates claim. The most vociferous critics, such as Dr. Peter Breggin, author of "Talking Back to Ritalin: What Doctors Aren't Telling You About Stimulants for Children," say Ritalin isn't for the child at all. It's for the teacher.

Prescriptions for Ritalin nationwide expanded 150 percent in the 1990s. By 1998, Michigan ranked third in the nation in Ritalin use. But a massive increase in the use of a serious drug would seem to indicate a massive outbreak of a serious malady, ADHD. Why, critics wonder, would the United States experience such an epidemic and not, say, Europe? Why would a serious disease strike only American school children?

One explanation has been put forward in class-action lawsuits filed in Texas, California, and New Jersey. The suits charge that Novartis, the pharmaceutical company that manufactures Ritalin, "colluded to create, develop and promote the diagnosis of... (ADHD) in a highly successful effort to increase the market for its product Ritalin." The charge is denied by the defendants, which include also the American Psychiatric Association and Children and Adults with Attention Deficit/Hyperactivity Disorder.

Yet, there can be no doubt that a massive education effort during the past decade, aimed at teachers and other school administrators, and the medical community has tracked with the massive increase in Ritalin use in the United States. Many pediatricians receive their education about treatment options from drug representatives and materials prepared by drug companies. Some critics charge that this leaves doctors predisposed to considering medication over other options.

Efforts by managed care companies to continue cutting the costs of health care are also a factor in Ritalin's popularity. Choosing a lifetime of medication for a patient can seem initially cheaper than paying for an extended course of psychotherapy. In the past year, a major national HMO operating in Michigan made a decision to no longer approve therapy for ADHD, declaring the treatment of choice to be medication.

These trends are in spite of research that shows significant support for the efficacy of therapy as compared to medication. In December 1999, a major study was published in the Archives of General Psychiatry that found Ritalin alone is not an effective treatment for ADHD on two measures which directly concern a child's success in school: academic skills and social functioning. Academic and social skills were found to improve only when Ritalin was combined with behavioral treatment in the home and/or at school.

This matched the findings of the major research review released by the National Institutes of Health (NIH) in 1998, which acknowledged that behavioral changes as a result of Ritalin use did not translate into significant "improvements in academic skills or social achievement." On the other hand, numerous studies indicate Ritalin is highly effective in keeping kids quiet.

In spite of this consensus in the field, Ritalin continues to grow in popularity in public schools. Some advocacy groups complain that Ritalin has become as commonplace as backpacks and detention in some Michigan schools.

Teachers and school personnel find themselves caught up in this struggle. Most parents and teachers of children on Ritalin report an incredible initial improvement in behavior, whereas therapy for the disorder can take a long time to show similar benefit.

When a teacher has a classroom of 25 students and five are out of control, any remedy that produces immediate results will likely be welcome. Unfortunately, most students-including those without ADHD-will show improved concentration and some initial improved performance when placed on Ritalin. This has led some to accuse our schools of medicating anyone who regularly misbehaves in class, singling out boys, especially.

Others state that schools have embraced ADHD and Ritalin as a way to medicate problems that otherwise would require special school services. Several studies claim that ADHD-diagnosed children are more likely to need special education services, regardless of their intelligence. The studies identify between 12 and 60 percent of children with ADHD as also having a learning disorder.

"Treating the child's ADHD with medication often does not change the underlying learning disabilities," says Gaffney. "It just makes the child less likely to be a behavior problem while he fails to learn."

Too often, harried school personnel appear to miss this point and grasp at the easy solution. One mother of a 5-year-old Michigan kindergartner (who asked to not be identified) reports that she has been encouraged on numerous occasions to place her child on Ritalin, despite doctor's advice that her child does not have ADHD and does not need medication. She is fearful that her child will not be passed on to the next grade unless her son is put on medication.

"This is not unusual," says Gaffney. "Many children referred to me by schools come with strong insistence the families place the child on medication. When we do convince parents to try other options first, we often hear complaints from the school.

"This is the reverse of how we work with other problems," he adds. "The process is supposed to be to identify a problem and causes first; only then do we chart the best treatment strategy. Many times schools will see the obnoxious behavior and immediately move to medication as the solution."

The problem is compounded by cases of overmedication. Gaffney says many children are placed on Ritalin without meeting the criteria for ADHD. This is more likely to happen when a child's parents are told by school personnel to medicate the child and the medication comes from a pediatrician inexperienced with ADHD. This places the doctor in the position of accepting diagnosis and treatment guidelines from the school without quality checks. The American Academy of Pediatrics is attempting to stem this problem by publishing guidelines for pediatricians to follow.

The controversy over Ritalin in our schools will likely continue, as there appear to be no easy answers. Ritalin seems to be a necessary and helpful drug for some people with ADHD, but potentially harmful and inappropriate for many who are referred for it. 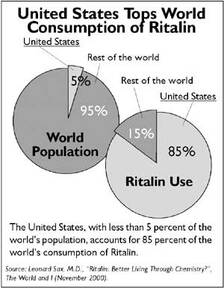