Schools prepare for the "Digital Age" 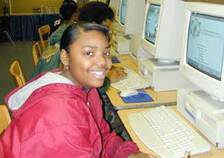 Approximately 87 percent of Michigan schools are connected to the Internet, but some worry that widespread availability of such software features as spell checkers and language translators will discourage students from learning these skills on their own.

The explosion of technological advances over the past decade has educators and politicians scrambling to ensure that every school is "wired" for the arrival of the "Digital Age."

But what does this Digital Age mean for schools, teachers, and students themselves?

For schools and education budgets, it seems to mean expense. Currently, U.S. schools are spending over $5 billion per year on computer technology, including discounts and funding from the federal "e-rate" program. And as a result, over 95 percent of all public schools are now connected to the Internet.

In Michigan, $73 million in e-rate funding has helped give the state its ratio of 13.1 students to every Internet-connected computer. Eighty-seven percent of Michigan schools have Internet access, with an average of 5.9 students per computer, according to data compiled by Education Week.

The education technology boom also seems to have caught educators off-guard. Some observers are expressing concern over many teachers' lack of ability to use and incorporate technology into the curriculum.

According to a 1999 survey conducted by the National Center for Education Statistics (NCES), only a third of teachers reported feeling "well prepared" or "very well prepared" to use computers and the Internet for classroom instruction. Other surveys and studies place this "preparedness" quotient much lower.

Businesses and school officials are addressing the problem by forming teacher training initiatives and professional development programs that will allow teachers to learn about hardware, software, and ways they can incorporate technology into their lesson plans.

State officials also are struggling to address the gap in teachers' skills and the demand for high-tech classrooms. Recently, Michigan legislators approved a plan to provide laptops and computer training to Michigan's 90,000 public school teachers. The $110-million program is intended to close the growing divide between teachers and students who have access to computers and those who don't, Gov. John Engler told the Detroit Free Press.

The private sector is also stepping in to help. Ameritech recently announced a $2 million program to provide intensive computer training to 2,000 Michigan teachers over the next two years.

Ric Wiltse, executive director of the Michigan Association for Computer-Related Technology Users in Learning, told the Detroit Free Press that districts should be budgeting 50 percent of technology funds for hardware and 50 percent for training to keep up with the ever-changing field.

"Even if we spent a third as much on training as we do on hardware, technology would be used more effectively in schools," Wiltse told the Free Press.

The high-tech classroom is not without its critics. "Techno-skeptics" have formed a California-based organization called Learning the Real World, which works to spread the message that too little is known about computers' impact on the learning process to justify the massive amounts of money and energy being expended to integrate technology into classrooms.

The critics argue that powerful software features including spell and grammar checkers, statistics programs, and language translators make it less likely that students will bother to learn academic skills on their own.

Critics also note that there is little evidence of a direct tie between computers and higher academic achievement. They point to research including a 1998 Educational Testing Service study of over 13,000 students, which showed that creative use of computers in math instruction raised test scores, but drilling with computers made scores worse.

It may be impossible to predict how technology ultimately will affect education in the coming years. Some are predicting that "cyber-schools" will be created-as a high-tech version of home schooling-where students use the Internet to take classes and earn their diplomas. Many colleges already are offering similar programs, and an entire Internet university, YorktownUniversity.com, has already sprung up.

One thing is certain: the Digital Age is here to stay, and this fact means teachers, parents, and administrators will be forced in the coming years to determine the appropriate measure of technology to incorporate into students' education programs.