Proposal 1: Gone but not forgotten 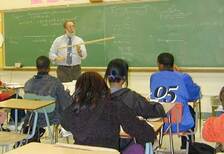 Though defeated, Proposal 1 has prompted reform in many school districts, including Saginaw's Buena Vista schools, which posted a dismal 51.7 graduation rate in the 1998-99 school year.

The overwhelming defeat of Proposal 1, the November 2000 school voucher initiative, does not necessarily mean the measure had no effect on Michigan's public education system.

The initiative, rejected by a 31 to 69 percent margin, nevertheless could have a lasting impact, if the reform plans of some of the state's poorest performing school districts are any indication.

Proposal 1 would have offered vouchers to students in "failing" school districts-those districts graduating less than two-thirds of their students. When the voucher campaign was launched in early 1999, 38 Michigan districts had graduation rates within the failing range. By Election Day, the number of failing districts had dwindled to only seven.

Few, if any, school reform initiatives- even those that have been enacted- could claim such astonishing impact. And Proposal 1's influence is being felt in other ways.

The seven districts that posted graduation rates below two-thirds endured a rash of negative press in the months leading up to Election Day. Many of these districts have taken the criticism seriously and are enacting reforms to improve their schools and increase graduation rates in years to come.

"You can't give all the credit for reform to Proposal 1, but it certainly put public schools on notice that many parents are dissatisfied and expect districts to do better," says Matthew Brouillette, director of education policy at the Mackinac Center for Public Policy.

Some school officials contacted by Michigan Education Report disputed the accuracy of the graduation rates attributed to their districts. And total credit for the following reforms cannot unequivocally be claimed for the influence of Proposal 1. However, many officials said that the possibility of competition from a full-fledged, statewide school choice program gave them a time-sensitive incentive that would not have been present without Proposal 1.

One school district on the failing list was Inkster, in suburban Detroit. By the end of 1999, Inkster was under tremendous pressure. First, it was under threat of a state takeover, because of dismal performance and a $1.9 million budget deficit. But Proposal 1's popularity in opinion polls at the time made it seem as if a statewide school choice plan could well be enacted by the end of the following year, expanding competition that was already luring students from the district.

Consequently, the school board became willing, for the first time, to consider a new approach to its problems: contracting the daily operation of Inkster schools to Edison Schools Inc., in the hope that Edison could turn things around. Edison is the nation's largest for-profit manager of schools and school districts. It currently manages over 113 schools nationwide, including 20 in Michigan.

The Inkster school board voted to contract with Edison in February 2000. By September, Edison had everything in place to mark the beginning of its first year of managing an entire school district. Inkster Superintendent Terry Ann Boguth is optimistic that this unprecedented reform effort will produce positive results.

Her faith is not unfounded. When news of the Edison deal spread, Inkster's enrollment increased for the first time in 10 years. Edison is instituting assessment tests to gauge student performance and is busy determining which subject areas need the most work. The district now requires parents, students, and teachers to agree to quarterly "learning contracts." The contracts define each person's responsibilities in the educational process and allow students to have personalized education plans that focus on individual areas of greatest need. The learning contracts will work in conjunction with narrative report cards, allowing teachers to provide ongoing input on a student's progress rather than just a letter grade.

The district also plans to provide students in third grade and above with a home computer, to allow access to homework on the Internet, and to encourage parents to maintain constant contact with teachers via e-mail. Changes also are being made in Inkster's curriculum. Officials plan to focus on improving reading skills and incorporating foreign languages into elementary education. More extracurricular activities are being offered to high school students. Laptop computers and professional development programs are being provided for teachers.

Meanwhile, new Holton Public Schools Superintendent Mike Estes disputes whether his district, located in Muskegon County, actually failed to graduate two-thirds of its students, as certified by the state government in 1999. Still, he admits the district has a problem with dropouts. It has formed a task force of community members, business leaders, and parents to offer solutions.

"Nothing is accomplished if it's only done with administrators. We must meet with teachers and the community," Estes says.

The Holton district plans to create a new alternative education program that will cater to students who are not being served by traditional teaching methods. Estes also suggests that the district's curriculum could use some revision. But he is confident his district is headed in the right direction. "I wish those who were so quick to criticize us were just as quick to work with us," he told Michigan Education Report.

Buena Vista Schools in Saginaw County is another district that has undergone much upheaval in the last year. With a new interim superintendent and a vocal community, the district is working hard to respond to community concerns over the district's performance. The district reported a graduation rate of only 51.7 percent in the 1998-1999 school year. Although Londia Langston, associate superintendent, does not have an explanation for the low graduation rates, she does say that the district is making a concerted effort to reform.

Some of the district's reforms include after-school and Saturday programs for struggling students, "school improvement teams" in each school building, analysis of Michigan Educational Assessment Program (MEAP) test scores to determine areas of greatest need for improvement, and, perhaps the most notable reform, surveying parents for improvement suggestions. Also, like Inkster, the district is attempting to increase retention rates in high school by instituting more extracurricular activities.

Ellen Bonter, superintendent of Vanderbilt Area Schools in Otsego County, says her district is working to find out where its dropouts have gone and why they left. In small districts-Vanderbilt has 310 students with roughly 30 high school graduates per year-not many students need fail to graduate to register a huge drop. In Vanderbilt's case, the graduation rate dropped suddenly from 100 percent in 1997-98 to 61 percent in 1998-99. Although Vanderbilt does not have an alternative education program for at-risk students, the district is looking at ways to discourage students from dropping out.

"We don't have the resources for alternative education programs, but we're working with other districts to provide alternative options, and we're also establishing dual enrollment options to encourage kids to remain in school," Bonter explains. Dual enrollment would allow students to concurrently take college course offerings while still in high school.

The district also hopes to provide college course options to its students via online university classes and a local university center. In addition, Vanderbilt's school improvement team is looking at ways to improve curriculum, increase MEAP scores, and expand course offerings within the district.

Bonter considers Vanderbilt's "active technology initiative" to be one of the district's most ambitious plans. The district plans to provide all students in grade six and above with laptops and access to the Internet from home. Like Inkster, Vanderbilt hopes to connect parents and students to the school via computers and the Internet. Bonter hopes this initiative will also help Vanderbilt reach out to home schoolers who may have left the district's schools.

Detroit also is making changes. In the last two years, 18,000 students have left the state's largest school district to attend private, charter, or public institutions in the suburbs. New Detroit public schools CEO Kenneth Burnley is instituting a long list of reforms to improve education in the district.

Shortly after assuming the CEO post in July of this year, Burnley hired 24 "directors of accountability for student achievement" to mentor and supervise the district's principals. Since that time, the district has begun "district assessment tests," to help teachers gauge student progress throughout the year. These tests have been deemed "mini-MEAPs" by Burnley, due to their similarity to the statewide achievement test. Eventually, Detroit's mini-MEAPs will be given to students in all grades, several times a year.

Burnley plans to institute preschool and full-day kindergarten in schools across the district, renovate dilapidated buildings and classrooms, provide Internet access in every classroom, and increase parental involvement. He hopes to increase funding for the district by creating a development team to raise money from corporate and private donors. He also has overseen numerous privatization efforts, which are expected to save the district millions of dollars in coming years. The district is even considering hiring Edison to run 40 or more of its worst-performing schools.

"It's hard to argue that charter schools and other forms of choice have not had a positive impact on public schools," says Brouillette. "To the extent Proposal 1's promise to expand choice helped more schools improve, that's a good thing."