Tom Monaghan: The Man with the Vision 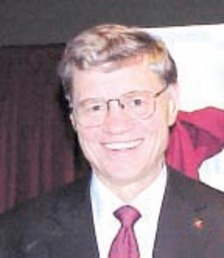 The variety of educational institutions supported by Ann Arbor's Ave Maria Foundation is impressive. This reflects the vision and personal drive of the $260-million foundation's founder, chairman, and chief benefactor, Tom Monaghan. In 1998 Monaghan sold his worldwide Domino's Pizza operation for nearly $1 billion. He retained ownership of the huge office building and 300 acres, which make up Domino's Farms in Ann Arbor. In that complex Monaghan maintains an office where, according to the Religious News Service, he "wants to work for God the rest of his life and die nearly broke."

The Ave Maria Foundation has quickly grown in both funding and scope of activity. In 1983, Monaghan started the Domino's Foundation, which began with assets of roughly $8.5 million. Over the years he found a variety of Roman Catholic causes to support. When he sold his pizza business he changed the foundation's name to Ave Maria Foundation and donated another $250 million, making it one of the largest foundations in Michigan.

Monaghan firmly believes that the lack of religious belief and practice is at the root of many social problems. He told the Chronicle of Philanthropy last October, "All of the problems we hear aboutthe school system, teen pregnancy, crime, drugs, and on and onwhen people talk about these things, they usually blame them on the breakdown in family. But they never go to the next step and ask why the breakdown in the family. It has to be because of the lack of religion."

Monaghan explains that his foundation provides the means for Catholic educators to explore new pedagogical directions. "The great genius of Christianity has been its ability to absorb the best of every culture it's encountered throughout history," Monaghan says. "Catholic scholarship is the sum of that inclusiveness, and we want to make our contribution by adding to the diversity of teaching approaches and school organization at all levels.

"Catholic education is in demand more than ever," he adds. "With the concern that's been voiced about access to quality education in the public districts, people of all faiths are clamoring to send their children to parochial schools. This puts tremendous stress on Catholic education facilities. We're in a position to supplement the Church's resources. We've taken on the economic burden of building and supporting schools that offer the virtues people expect of Catholic institutions, without causing more financial and operational complications for parishes and dioceses."