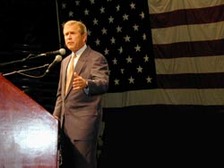 Education reform has emerged as one of the leading issues of the 2000 presidential campaign. Opinion polls consistently show large numbers of parents concerned about the state of public schools, and major party candidates George Bush and Al Gore are tailoring their messages to appeal to this concern.

Although the federal government accounts for only about 7 percent of education expenditures in the country, federal education dollars often return to state and local governments with a bewildering array of restrictions and requirements attached.

Accordingly, federal education policy can have a great impact on Michigan teachers, schools, and students. Michigan Education Report therefore has compiled for its readers a summary of the two major party candidates' positions on various education issues, culled from Web sites and public pronouncements.

Both candidates support a strong federal role in education, but disagree on the degree to which that role should be expanded.

Bush proposes to consolidate over 60 federal programs into five categories including disadvantaged children, bilingual education, teacher quality, character education, and school choice. He favors moving the "Head Start" program from the Department of Health and Human Services to the Department of Education and the creation of several new large federal programs. States may opt out of federal regulations if they agree to "establish accountability systems, testing every student in reading and math," according to the Bush campaign Web site.

"I'm going to lift the burden of bureaucracy and give states and local folks more authority over federal education dollars than they've ever had before," Bush told a Washington conference sponsored by the Conservative Political Action Committee in January 2000.

Gore calls for an even larger federal role, proposing a $170 billion "public education investment plan" paid over 10 years out of a trust fund and with 10 percent of the federal budget surplus. He also favors more federal programs to help families pay their education and job training costs, including tax deductions for college tuition; to set up "Life-Long Learning" investment accounts; and to establish a new "National Tuition Savings Program." The Department of Education will assume more state and local responsibilities, including the setting of teacher certification requirements and national achievement standards and the funding of education for early childhood years.

"Together, we must bring revolutionary change to our public schools. I want to work with parents, teachers, and principals to create the modern classrooms, higher standards, and similar class sizes your irreplaceable kid deserves," says Gore.

School choice reducing the political and financial barriers that prevent parents from choosing the best and safest schools for their children may be the most divisive issue in the education debate. Advocates include many black parents with children in failing inner-city schools, religious groups, and proponents of greater parental freedom in education. Opponents include some civil rights groups, education employee unions, and other public school organizations.

Bush proposes a plan to allow children in failing schools to leave after three years with a $1,500 federal voucher to help them pay for enrollment in a new public or a nonpublic school, or for educational aids.

"In the worst case, we will offer scholarships to America's neediest children, allowing them to get the emergency help they should have," Bush told an audience in Los Angeles Sept. 9. "In any case, the federal government will no longer pay schools to cheat poor children." Gore opposes vouchers, although before accepting the vice presidential nomination Senator Joe Lieberman supported vouchers for students in the District of Columbia.

Both candidates support charter schools, but differ on details. Bush would leverage $3 billion in federal funds to create 2,000 new charter schools. Gore would triple the number of charter schools by expanding existing programs.

Acknowledging that American students perform particularly poorly in math and science compared with students in other countries, both candidates favor federal initiatives to address the problem.

Bush proposes to offer federal Pell grants of $1,000 to students who pass either Advanced Placement or college math and science courses while in high school. He would set aside $1 billion over 5 years to fund collaborations between colleges and states in math and science. He also favors having students tested in math every year in grades 3-8 and raising the maximum student loan forgiveness from $5,000 to $17,000 for those students graduating in engineering, technology, math, and science.

Gore calls for funding one million new teachers over the next 10 years, with emphasis on areas such as math and science. He would forgive loans for 300,000 students who agree to teach math and science in "high-need" schools and other scarce subject areas. He also wants national math standards to be established for grades 4, 8, and 12.

Over the last 10 years, every state but Iowa has adopted standards in reading and math, and most states require students to be tested every year in both subjects. This movement for standards in measuring student progress and school accountability began at the federal level under President Bush and has continued ever since. Both candidates intend to continue in this direction.

Bush would create a "reward fund" of $500 million over 5 years for states that excel and proposes to cut federal funding of states that fail according to federal standards. He calls for states to give school-by-school report cards to the parents and the public. Bush also calls for failing schools to adopt reforms or lose Title I funding. Reform measures would include restructuring management, personnel changes, and possibly a school of choice program.

Gore proposes more funding for failing schools to overhaul the curriculum, provide professional development for teachers, and fire low-performing teachers. He would consider closing down a school and reopening it under a new principal if the school does not meet performance standards for four years. Gore also favors allowing students in failing schools to transfer to another public school and withdrawing a portion of funding from states that fail to improve student scores.

On standards, Bush wants all states to use the National Assessment of Educational Progress Test in the 4th and 8th grades. He calls for all states to develop their own standardized tests for assessing student achievement in math and reading in grades 3-8.

Both candidates agree that teacher quality is a vital element in the effort to improve education, but differ in ideas to improve that quality.

Bush would consolidate existing federal programs for reducing class size and training teachers into a single fund, which would receive an additional $400 million and be distributed to states in proportion to student population. States would spend the funds on whichever teacher quality investment was needed to fit their particular situation, such as hiring more new teachers or improving professionalism of the existing teachers.

Bush also calls for a $400 tax deduction to cover out-of-pocket teacher expenses. "Teachers are not the object of education. They are the engine of education reform. They have a high calling, and we must respect it," he told an audience in Milwaukee in March.

Gore would require states to ensure all teachers obtain credentials by 2004 or lose federal funding. He also proposes an $8 billion incentive program, which would give all teachers a $5,000 pay raise if their communities adopted tougher teacher standards. Beyond that he would give "master teachers" an additional $5,000. 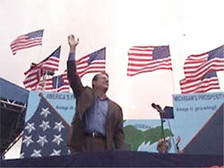