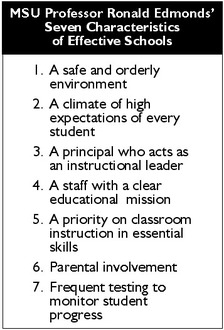 An animated Emily Shahan leads her class of peppy students in reading aloud a scribble of numbers, symbols and letters - funny-looking shapes that literally are Greek.

Adriana is 11. She and her fifth-grade classmates are studying algebra, a subject usually not taught until high school, or perhaps in suburban middle schools or other advanced programs. But this is an elementary school, and it stands smack in the middle of urban desolation a couple of miles from downtown Detroit.

Requiring fourth- and fifth-graders to study algebra is the most dramatic example of the high academic expectations at Owen School, whose students have shown extraordinary achievement for about a decade even though 80 percent are poor and more than 90 percent are black. Nearly all live in a dreary neighborhood where, on many blocks, vacant lots overgrown with tall weeds outnumber the dilapidated wooden houses still standing.

In cities across the country, and elsewhere in Detroit, similar schools that enroll mostly poor, minority students have generally lagged far behind in the new standardized tests being used to decide who moves to the next grade or gets a diploma.

This persistent pattern of failure has emerged as a main point of political debate about education, with everyone from President Clinton and his potential successors to congressional leaders and governors calling for tough action to fix public schools where low-income students aren't learning as they should.

But there is no worrisome "achievement gap" between Owen students and peers elsewhere. Since 1991, better than 80 percent of Owen students have passed the standardized tests in math, reading, writing and science that Michigan requires of fourth- and fifth-graders each year.

Only in writing did Owen trail the state (17 points) and Grosse Pointe (36 points). But it was an off year for Owen: The passing rate in writing had been a stratospheric 94 percent a year earlier, before inexplicably tumbling to 42 percent.

Owen is unusual but not unique in having low-income students with high test scores. Five studies published in the last year have identified several hundred schools around the country that have defied statistical odds and beaten the achievement gap. The number of such schools is comparatively low, though: the Education Department has counted about 7,000 schools that serve the poor and rate as academically low-performing.

The exceptions to the pattern of low achievement seem to disprove the notion that demographics is academic destiny. But there remains a bedeviling question about the schools where low-income students nonetheless reach high levels of achievement: How do they do it?

"People want to know what my secret formula is so they can manufacture it and spread it around everywhere," says Patsy Burks, Owen's principal for a dozen years. "I can't tell them. I don't know what it is. There's too many things you have to do. It's not just one thing. It's a combination."

Almost by happenstance, Burks does provide a clue about her educational philosophy - and it's hardly a secret - when she hears the name of Ronald Edmonds.

Edmonds was a pioneering education professor at Michigan State University best known for his "effective schools" research, which he conducted by visiting schools that worked and identifying their common characteristics. What Edmonds discovered wasn't a whiz-bang curriculum or a magical teaching technique, but education's workmanlike equivalent of football's three yards and a cloud of dust.

His research isolated seven characteristics of effective schools: a safe and orderly environment, a climate of high expectations of every students, a principal who acts as an instructional leader, a staff with a clear educational mission, a priority on classroom instruction in essential skills, parental involvement and frequent testing to monitor student progress.

It was 25 years ago that Edmonds completed the first round of his research, which enjoyed a boomlet of popularity before losing out to new educational fads that weren't as difficult to implement and weren't based on careful study. He died in 1983.

"Some of the principles he had and believed in made a lot of sense to me," recalls Burks. "I think the most important was: All children can learn."

Edmonds has another disciple in Michael Cohen, assistant secretary of elementary and secondary education in the Department of Education.

"I started writing about this stuff in 1979, and it wasn't exactly a secret when I started writing," Cohen said. "We've known for a long time what it takes to make effective schools. The real question is, 'Do we have the will and the capacity to make them on a large scale?'"

Owen enjoys plenty of both from a dedicated principal who tries to make sure students get what they need from a hard-working, stable corps of well-trained teachers, all but one of them fully certified. Other inner-city schools suffer from a revolving door of inexperienced teachers still completing their professional training.

The school also benefits from small classes, so small that Burks wouldn't disclose their exact size. A year ago, the pupil-teacher ratio was 17-1, according to the state. She believes that student turnover, which causes havoc with lesson planning at similar schools, is also relatively low, though the school keeps no statistics.

Burks accomplishes all this with the same resources as similar Detroit schools.

Margaret Horner, leader of the parent council, describes the experience of her three children at the school as "fantastic. The teachers . . . expected more from students than teachers did at the other schools my children attended. Other places you could try hard if you wanted to. Here, they make you try hard."

As she finishes lunch in the school's tiny lounge, second-grade teacher Lynda Bartak says, "This is a nurturing school, in all the good ways that word implies. But there is a firmness. We expect you to do your work and complete it and be proud of it."

Burks says Edmonds supplied her with what she calls "do-how," but she has clearly improvised a bag of her own tricks.

When Burks arrived at Owen a dozen years ago, she met with teachers weekly to plot how to raise test scores. They devised a strategy to rebuild the curriculum around the content of the tests and assign the most experienced teachers to administer them in small groups. They send notes home to remind parents to send children to bed early the night before testing, then eat a good breakfast before coming to school.

"I'm looking at all the variables that make the best testing situation," Burks says. Self-assured teachers in groups as small as a dozen children help calm down students so they'll do their best. And she makes no apologies for what critics might scorn as teaching to the tests or what others might describe as sensibly realigning the curriculum.

"It's not fair to test something that's not been taught," Burks maintains.

Samuel Casey Carter, author of a Heritage Foundation report on Owen and 20 similar schools, suggests Owen hasn't dumbed down its curriculum with the changes because Michigan has "an exceptionally hard test. It's one of the few of these exams that's actually a serious test."

Carter says he independently verified Owen's test scores, which appear to be corroborated by scores in lower grades on the Metropolitan Achievement Test-7in his opinion, another of the better standardized tests.

To increase contact with parents, who often won't show for teacher conferences or parent council meetings, Burks has also come up with some novel tactics. Report cards aren't sent home with students, but must be picked up by parents.

Instead of regular council meetings, there is a monthly activity featuring students to attract proud parents. Once, the distribution of family photo albums was used as a lure.

Visitors must ring a doorbell to enter the school because the outside doors are kept locked. Few outsiders gain admittance. The principal rejects most requests to visit.

"I really suspect anybody who comes to my school and says it's a phenomenon. It's not - if you're teaching," Burks says. "It's just sort of dedication to the job."

This article was written by Kenneth J. Cooper and is reprinted with permission from The Washington Post.