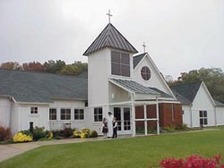 Domino's Pizza founder Tom Monaghan, after receiving nearly $1 billion from the sale of his business, is devoting his resources to building a network of primary, secondary, and post-secondary Catholic educational institutions.

Through the Ave Maria Foundation, of which Monaghan is the principal benefactor, eight K-8 schools are up and running and accepting enrollment. According to Dan Guernsey of the Private Catholic School Network, the schools feature strong family involvement, character formation, a positive peer environment, and religious instruction based on the catechism of the Catholic Church.

According to Guernsey, the schools' approach to education has received such tremendous support in the Ann Arbor area, the foundation is already considering ways to franchise the concept throughout the United States. "Our goal is to do whatever we can to open up independent Catholic schools," he says. "We'll do whatever we can to help them." Guernsey regularly receives inquiries from other states, he adds.

The foundation opened its first school, Spiritus Sanctus Academy, in 1997 at the Domino's Farms complex in Ann Arbor Township, and three other schools, each also called Spiritus Sanctus Academy, quickly followed. By design each academy has a total enrollment of about 100, electing to feature small multi-grade classes, typically kindergarten, 1-2, 3-4, 5-6, and 7-8. According to the foundation, this feature encourages cooperative learning and mutual assistance between older and younger pupils.

The Ave Maria Foundation also supports four other schools in the Ann Arbor area that use various teaching methods. Two of them are Shepard Montessori Schools in Milan and Ann Arbor, which opened in 1997 and 1998, respectively. According to the foundation, these schools use the well known "progressive Montessori pedagogy," including "child-driven progress," which school officials claim is especially appropriate for students who struggle or excel in different subjects. They have a total enrollment of approximately 60 with both sites expecting to expand to 4th through 8th grade classes. The Milan school was formerly a Catholic school that had been closed for some time.

Another school, called Agnus Dei, uses a non-graded structure. Students progress at their own rate, but within a traditional curriculum. In this case as well the "three room" school concept is used with pre-kindergarten, kindergarten, grades 1-3, and grades 4-8. Enrollment there is also around 60.

The foundation's network also includes the Huron Valley school which, Principal Tom Kotyak told the Ann Arbor News in March, originally opened under an affiliation with the Word of God Church. But falling enrollment and financial difficulties made it necessary to find a new source of funding. The Ave Maria Foundation offered to step in on the condition that Huron Valley become a Catholic School, which it has agreed to do. Changes include a weekly Mass for all students and Catholic religious education. Paul Roney, executive director of the Ave Maria Foundation, told the Ann Arbor News that neither the foundation nor the local diocese will take an active role in running Huron Valley. The school, located in downtown Ypsilanti, enrolls 180 students.

In addition to supporting K-8 education, the Ave Maria Foundation also purchased a large parcel of land in the Ann Arbor Domino's Farms complex and contributed it to the long-established Ann Arbor Gabriel Richard High School for future building of a new Catholic high school.

The foundation is also active in higher education. In 1998, it underwrote the founding of Ave Maria College, a co-ed, four-year liberal arts institution located in Ypsilanti. The college offers degrees in three major fields of study, with nearly a dozen others planned. "All are built around a comprehensive, intellectually challenging core curriculum, and an active campus life that emphasizes piety, evangelism and charitable service," according to Foundation spokesman Bill Koshelnyk.

In 1999, Ave Maria College became Ave Maria University with the addition of St. Mary's College of Orchard Lake, in Oakland County. "With its 115-year tradition, St. Mary's offers 16 majors with special focus on pre-medical and other pre-professional programs, as well as an increased emphasis on theology and philosophy," says Koshelnyk. "In addition, the university operates an extension campus, Ave Maria College of the Americas, located in San Marcos, Nicaragua."

The most recent addition to Ave Maria University is the new law school, which began classes in the fall of 2000, with 75 students. The school claims it is "unique in approaching legal study specifically from the perspective of the Catholic moral and intellectual tradition that has advanced the concepts of natural law, individual rights, and human dignity on which our system of justice is based."

The law school, located in Ann Arbor, spent $4 million renovating a former 84,000-square-foot office building on 11 acres. According to the college, the incoming students hail from 39 universities from 31 states and Canada, with a median LSAT score in the top 21 percent.