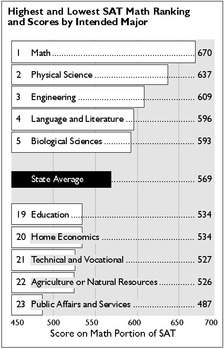 A recently released summary of SAT scores for the Michigan high school class of 2000 reveals that students intending to major in education scored below the state average in both math and verbal performance.

According to "2000 Profile of College Bound Seniors," a report from the College Board, the organization that administers the SAT, 10,280 Michigan high school students from the class of 2000 took the SAT I test. The report presents SAT math and verbal scores and also the students' "intended college major," chosen from 23 categories. The tables below show the math and verbal scores and intended college major for the highest and lowest performing students.

This is not to say that all teachers are coming from this pool. In fact, many education experts believe that future teachers should major in a non-education subject area, such as math or biology, to develop content mastery, and supplement their major course work with education theory and practice classes. 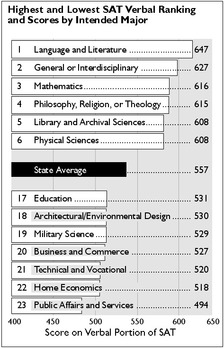