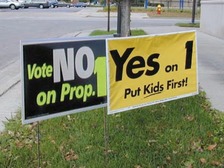 On November 7th, voters could make Michigan the second state to adopt a statewide voucher program for children in failing school districts. The amendment to the Michigan Constitution would also establish regular testing of teachers in academic subjects and increase the guaranteed per-pupil funding in public schools.

The issue of school vouchers will take political center stage Nov. 7, 2000, as Michigan voters go to the polls to decide if a measure known as Proposal 1 should be adopted to amend the state constitution.

The proposal, if approved, would overturn the constitutional ban on K-12 vouchers, tax credits, and other forms of indirect aid to families wishing to choose nonpublic education for their children.

The state would be required to provide tax-funded vouchers for nonpublic school tuition, worth half of the per-pupil expenditure on public schools, for students in districts with graduation rates less than two-thirds. Seven of Michigan's 555 school districts, including Detroit, automatically would be affected the first year. Other districts could decide by school board action or a vote of local residents if they wished to adopt vouchers.

Proposal 1 also would constitutionally guarantee that the level of per-pupil funding for public schools never drops below fiscal year 2000-2001's record-high levels, and would require teachers in public schools and nonpublic schools that accept vouchers to be tested in academic subjects.

"Every child deserves a chance to learn," according to the Web site of Kids First! Yes!, the group promoting Proposal 1. "But too many children in Michigan are being denied that chance. They're trapped in schools that don't work."

Kids First! Yes! says its proposal would improve education in many ways, and that periodically testing teachers for competency is an important, and often overlooked, means of achieving better schools.

"Most everyone agrees that whether or not children succeed in school depends on the knowledge, skill, and commitment of their teachers," says the Kids First! Yes! Web site. "With so much riding on the quality of teachers, the public needs assurance that every student is taught by teachers who know a lot about the subjects they teach."

According to current law, new teachers who were state certified after 1992 are presently required to pass a test, but the vast majority of teachers in the state have not been tested.

"Opponents of education reform have tried very hard to divert attention from teacher testing, but the overwhelming majority of Michigan parents and taxpayers support this common-sense reform," says Kids First! Yes!Co-Chairman Dick DeVos. "Teacher testing is an idea whose time has come."

But the political battle over the proposal has indeed focused on its most controversial aspect, vouchers. "Vouchers have been cleverly packaged as a plan to help the poorest kids from the poorest, most troubled school districts," according to ALL Kids First!, an anti-voucher coalition ofpublic school groups and unions including the Michigan Education Association. "But it is precisely these kids who will be hurt most by a weakened and abandoned public school system."

Fear of an "abandoned" public education system is no reason to vote no on the proposal, say supporters. "The Kids First! Yes! funding guarantee will protect school districts against a cut in their per-child funding due to a recession or a change in funding priorities by politicians," says the KidsFirst! Yes! Web site.

Proposal 1 supporters add that public schools will not be harmed, pointing tothe fact that the vouchers are worth only half of the approximately $6,600 schools receive in per-pupil funding. Each student who is switched from a public to a private school would save the school aid fund $3,300.

According to Michigan Department of Education data, nearly 180,000 students live in the districts that are immediately eligible for a voucher plan under the proposal. This includes over 170,000 students in Detroit and nearly 6,500 in the Buena Vista (Saginaw), Coleman Community, Holton, Inkster City, Mackinaw City, and Vanderbilt Area school districts. Of these districts, Inkster has the worst graduation rate: 21 percent. The state average is 81 percent.

Another 120,000 students live in 30 districts that are just above the two-thirds graduation rate cutoff for vouchers.

"These kids are being left behind and are being robbed of the American dream," says Kids First! Yes! Co-Chairman Eddie Edwards of Detroit's Joy of Jesus Ministries.

Voucher opponents view the Department of Education data differently. "Let's remember that this list proves almost all public school districts in Michigan are successful and doing a good job educating our children," says Dorothy Beardmore, president of the state Board of Education and honorary co-chair of ALL Kids First! "With all the talk about failing schools, the fact is that our schools are not failing. Our schools have shown a steady improvement over the past 10 years."

The Department of Education data also list 188 school districts with graduation rates above 90 percent, including 15 that graduated 100 percent of their students. (See www.educationreport.org/3122 for a related story and charts on statewide graduation and dropout rates.)

While acknowledging that "Michigan has some great schools," KidsFirst! Yes! notes that citizens nevertheless should be concerned if there are any children not being served by their schools.

"Supporters of Proposal 1 believe every child in Michigan deserves a quality education today," says Robert Coverson, a Kids First! Yes! spokesman and pastor of Detroit's Second Chapel Hill Baptist Church. "No parents should ever be forced to send their child to a failing school."

Another contentious issue has been the question over whether or not vouchers run afoul of "separation of church and state" jurisprudence.

"Since 85 percent of the private schools in our state are run by religious institutions, it is inevitable that public tax dollars will be used for religious education if this proposal passes," according to the ALL KidsFirst! Web site. "This violates the U.S. Constitution and the principle of separation of church and state. Allowing indirect funding by passing money through the hands of parents may be less obvious, but it still violates the constitution."

Proponents of Proposal 1 argue that this view is not shared by the U.S. Supreme Court, which ruled in June that Louisiana's use of public funds to purchase computers and other instructional materials for parochial schools was a constitutional form of indirect aid.

Vouchers, argue Kids First! Yes! spokesmen, are similar to the Louisiana ruling. "Vouchers provided under the Kids First! Yes! education reform proposal are defined as only indirec tand not direct aid to nonpublic schools, clearly passing this latest constitutional test," according to the group's Web site.

"Opponents of education reform lost a major battle," Kids First!Yes! Co-Chairman DeVos said of the ruling. "Those who want to vote 'no' on equal educational opportunity will not be able to stop education reform in the courts."

The proposal's opponents agree reform is necessary, but say that vouchers are not the answer. "There is no quick fix or simple solution to some of the problems that some schools face," says ALL Kids First!'s Beardmore. "Vouchers do absolutely nothing to address the issues that are vital to continually improve our schools to meet the needs of all children."

"Voucher supporters continue to talk about teacher testing, funding, and a lot of other things which are simply not detailed in this deceptive proposal," adds Georgene Campbell, chair of ALL Kids First! and former president of the Michigan PTA. The bottom line, she says, is that "Proposal 1 takes money away from children in our local neighborhood schools and gives it to private and for-profit schools."