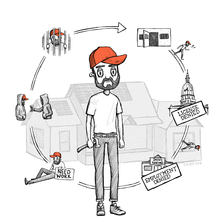 Why send a criminal justice expert to attend a meeting of free-market advocates to discuss job creation and workforce development? Because, increasingly, employers have come to see these issues as closely related — and maybe even the same thing.

Prominent Michigan businessman Michael Jandernoa recently penned an opinion piece for Fox News titled “Why hiring people with criminal records benefits all of us.” This former CEO of a 10,000-person company doesn’t mince words. “I have one message for America: we can no longer exclude this vital component of our workforce.”

Jandernoa’s admonition echoes conclusions that the Mackinac Center has been promoting since we launched our criminal justice policy initiative in 2016. Steady employment is a key factor in reducing the likelihood that an offender who leaves prison will commit another crime. This makes us all safer. Innovative programs like the in-prison vocational schools that the Department of Corrections has named “Vocational Villages” seek to prepare inmates for gainful employment. This has had the added benefit of providing a fresh infusion of talent in an industry where it’s desperately needed: the skilled trades.

Michigan-based employers, including Alta Equipment, Sakthi Automotive Group and others, have specifically sought out ex-offenders to fill open positions. Hiring managers note that these workers exhibit extra motivation because they understand the value of a second chance and rise to meet expectations.

These employees were on the minds of a dozen free-market policy experts who gathered outside Washington, D.C., in early December to discuss policies that promote a healthy workforce. The meeting was organized by State Policy Network, a Virginia-based organization that links state-based free-market think tanks to a network of ideas, people and resources to support the liberty movement nationwide.

Over three days, attendees spent time sharing ideas, experiences and best practices among themselves. They also met with representatives from the White House Domestic Policy Council, the White House Office of Information and Regulatory Affairs, the Department of Labor, the Federal Trade Commission, the Republican Study Group and the staff of U.S. Sen. Mike Lee, R-Utah. Many of the individuals we met had come from the free-market think tank network, and all were ready to consult with and assist members of that network.

The most frequently raised issue — during both the attendee knowledge-sharing sessions and meetings with government staff — was occupational licensing. Mackinac Center researcher Jarrett Skorup has written prolifically about the barriers to employment that arise when the state requires people entering a profession to obtain extensive and expensive training and education. These requirements are touted as promoting public safety, which masks the reality that they are frequently adopted to allow incumbent professionals to keep a cartel-like hold on an industry, raising prices for consumers as a result. Skorup has highlighted licensing’s inconsistencies and absurdities. (In Michigan, for example, you must be licensed to paint but not to hang drywall, and to lay tile but not to lay carpet. Cosmetologists require more hours of training than commercial pilots). For my part, I write about the implications for criminal justice of using licensing to bar anyone with a criminal record from an industry — even one wholly unrelated to the nature of their crime.

As Jandernoa observes, Michigan firms can little afford to bar an entire — and, unfortunately, growing — segment of the population from employment. As state and federal politicians and bureaucrats continue to pack new crimes into already-bloated penal codes and rule books, it is no wonder that one in four Americans now has a criminal record. Michigan law alone contains over 3,100 crimes. That doesn’t count federal laws or an untold and growing number of state and federal regulations and administrative rules that carry criminal sanctions. Little wonder, then, that some observers assert that the average American probably commits three felonies per day without even realizing it.

But employers need skilled laborers, and people returning from prison need steady employment. With businesspeople now taking the lead in reducing the workplace stigma of having a criminal past, perhaps politicians will finally take steps to adopt policies that make us all safer and prosperous.