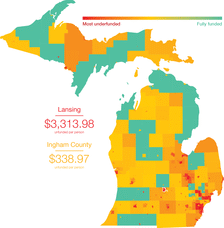 To see how your county ranks, check out our interactive map at mackinac.org/OPEB.

Government employees tend to be the largest creditors of governments in Michigan. This is because the state and its local governments push the costs of today’s government onto tomorrow’s taxpayers through their retirement systems. By underfunding pension systems and offering to pay for employees’ health insurance when they retire, governments have racked up billions in debt and more billions in something less than debt. While the state has done a lot to try to stop this practice, lawmakers whiffed on their latest attempt to stop kicking to future taxpayers the costs of local government pensions and retiree health insurance benefits.

And they made a mistake by conflating the two obligations. The differences matter.

When an employee earns pension benefits, the employer is supposed to contribute money into a pension system where the money is invested, grows and pays for the full amount of the pension the employee has earned. If governments put less in the pension systems than is needed to pay for earned pensions, they need to correct that deficiency and contribute more money. Pension debt is real debt.

Retiree health insurance is different. The benefits are not legal obligations, and government employers tend not to set aside money to pay for them. They instead write checks to insurers to cover retirees once the bills are due. This means that the payments taxpayers make for health benefits today are for an employee’s service that could have happened 40 years or so ago.

Because these payments are not legal obligations, retirees cannot trust that they will continue. Employers could have set aside money to pay for benefits to ensure that they are secured, since legal protections are absent. It would cost local governments at least $12 billion to prefund these benefits, but they’ve only saved $3 billion. Taxpayers, though, must keep paying the bills until government managers decide to exercise their option to reduce costs by cutting benefits. So it’s a bad deal for government workers and taxpayers alike.

The lack of a legal obligation, high costs and the fact that people are covered by Medicare when they reach 65 anyway make retiree health benefits an area ripe for cost-cutting. Besides, it’s something that few people receive in the private sector.

Because pensions and retiree health insurance aren’t the same, lawmakers have different obligations in funding them. Pensions are promises and debt, and local government managers need to honor those promises. Retiree health care is a mismanaged benefit that needs to be cut.

State officials could have passed a law to encourage local governments to restrict eligibility to career employees or offer new employees different kinds of benefits, or mandated local governments primarily participate in Medicare. They could have used a host of other ways to lower the costs of local government benefits. But they didn’t. Instead, they mandated that the benefits be funded at 40 percent of projected costs or be declared “underfunded,” requiring local governments to develop a plan to fix the shortfall. The Legislature’s response to funding requirements turned the $12 billion cost for optional spending into a mandate to either cut or set aside $4.8 billion to pay
for it. In other words, lawmakers made matters worse, not better.

So it’s disappointing that lawmakers caved in to union demands and did not encourage local governments to reduce costs for benefits.