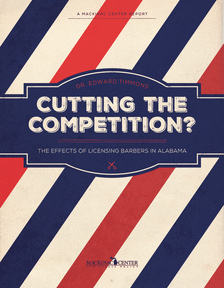 This study will be available online soon at mackinac.org/studies

Unlike the hundreds of think tanks in Washington, D.C., the Mackinac Center is unique in that it only focuses on policy issues pertaining to the Great Lake State. Nevertheless, our work requires studying policies in other states to better understand what’s best for Michigan. And that’s exactly what we did with one of our recent research publications, “Cutting the Competition?: The Effects of Licensing Barbers in Alabama.”

The merits of an expansive set of occupational licensing laws — rules that require people to get the government’s permission before they can work legally — are coming under more intense scrutiny. Reformers from both the left and right are raising concerns about the negative effects these laws have on people trying to find work in licensed jobs and on the prices you and I pay for these services. Prodded by the Mackinac Center, the Michigan Legislature has made some reforms to licensing, but not nearly enough.

With that in mind, we wanted to research a concrete example of the effects licensing has on workers and consumers. But designing a study that would accomplish this is a challenge, because unlike scientists working in the laboratory, we can’t just set up an experiment and see what happens. Instead, we have to take advantage of what researchers call “natural experiments” as they occur, and Alabama happened to be home to just such an experiment concerning occupational licensing. So we decided to study it.

From 1983 to 2012, Alabama was the only state in the country that did not require a license for barbers. Other states forced would-be barbers to endure years of training, pay fees and pass state-administered exams before they could legally be paid to cut someone else’s hair. But then in 2013, Alabama lawmakers introduced a new licensing requirement for barbers, and this created the natural experiment for us to study. Specifically, what happened to the barber industry after these licensing requirements were introduced, compared with how it operated before?

In studying Alabama’s data on barbers, Timmons was testing the long-standing hypothesis — first proposed by economist George Stigler and separately by Milton Friedman — that licensing laws enrich incumbent firms and limit competition. These effects, of course, are harmful to consumers who suffer through higher prices and fewer choices.

And this is exactly what Timmons found as an effect of Alabama’s new requirements of 2013. After the license law went into effect, revenue per barber shop that was already licensed — or grandfathered in — increased faster than was common before the licensing requirement. It also increased faster than the revenue of beauty shops that offered similar services but were not subject to licensing. Finally, it grew faster than that of barber shops operating in border counties in neighboring states which did not change their licensing requirements.

Additionally, Timmons looked at what happened to the number of barbershops per person in Alabama after licensing was enacted. He compared the barbershop industry to beauty shops in the state as well as to barber shops in nearby states. He found that barber shops in Alabama experienced little growth compared to beauty shops and barbers in nearby states, suggesting that the introduction of the license contributed to limited competition for existing barbers.

Occupational licensing reform is going to be a key issue in the near future. We think this research on Alabama’s barbers provides more evidence that suggests the harmful economic effects of these laws. We hope that public officials in Michigan and other states will start to roll back many of them for the benefit of workers and consumers.