Lake Michigan Academy and the Right to Learn Differently 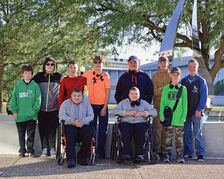 For three decades, Mackinac Center supporters have advanced sound education research, policy recommendations and positive changes in Michigan at the state and local level. Charles and Janet Stoddard have been connected with the Center for most of its existence. As parents, they have gone above and beyond to make school choice and accommodations for unique learning styles possible for their own son — and hundreds of other young people. When nongovernment schools have the right to exist and determine who their students will be, they are free to focus on students who learn differently, giving them a specialized environment that will help them thrive academically and socially.

In 1984, the Stoddards were at a New York airport preparing to send their son to a private school that would accommodate his learning needs when they met John and Kay Lowe. The Lowes were in a similar situation, only they were sending their child to a different school. They all began discussing the amount of time, travel and tuition costs required for their children’s education. The four of them concluded that if they could collaborate with a few other parents in similar situations, they could start their own school with what they had been paying for travel and tuition. This discussion came to fruition when they join four other couples, and Lake Michigan Academy opened its doors in Grand Rapids, Michigan the following fall with five students.

“Enabling students with ADD, ADHD, and dyslexia to overcome learning challenges” is the mission of the school. Before you roam the halls of the academy, check your expectations of a standard brick-and-mortar 8-to-3 school at the door. Instead, you will see active students talking out in lessons and moving about. In the next hall, you will see focus groups that involve teachers and three or four students in laboratory classes. What you won’t find are 35 students sitting for hours on end in the same classroom.

Mornings are focused on content and afternoons are for lab classes. “You saved my life,” a student with both an IQ that’s near-genius level and a diagnosis of dysgraphia once said to Nanette Clatterbuck, the school's first teacher and current CEO. Stories like hers and the thought of students trapped in schools that are failing them ignite a passion in the staff and founders at the academy.

Enrollment was at a record 50 students in 2016, and held strong at 46 at the beginning of this school year. There’s a limit of eight students in a class, and tuition is below the per pupil state average at Michigan’s taxpayer-funded schools. Most students rely on scholarships made possible by the Stoddard’s foundation and a handful of generous leaders who see value in a school accommodating learning differences in West Michigan. “Some parents have moved to the area just to attend the school,” Clatterbuck shared. “All grads are career or college ready — nobody lives in the basement!”

Transportation remains the biggest hindrance to reaching more students who are stuck in schools that are not helping them fulfill their academic potential. Clatterbuck was elated to learn that exploring transportation vouchers was a top priority of the Mackinac Center’s education policy work. She shared with me the story of a current student whose parents pay taxes to the government school district but choose to send her to Lake Michigan Academy. A district school bus passes by their home and the academy each day, but it is legally prohibited from giving her a ride.

Generous and visionary people of influence like the Stoddards continue to make school choice a reality in spite of government policies that limit the number of lives transformed each year. The school continues to recruit top-tier talent to its staff even though the administrators and teachers could earn more elsewhere. By experience and conviction, the Stoddards know that it’s important to put the needs of students above all else, as Lake Michigan Academy does. That’s why they are passionate about advancing sound public policy that will make such schools more common.