Finding the Courage to Learn 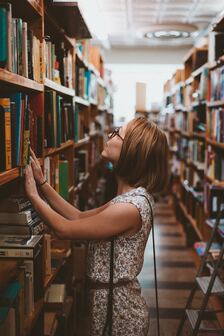 Change is hard. Yet it’s the stuff of New Year’s resolutions — did you forget yours already? — and an inescapable fact of life.

Early January is hardly my favorite time of the year. I prefer the middle of May, when the weather is finally starting to warm up, trees are in bloom and New Year’s resolutions are finally paying off, if I’ve managed to stick to them. But I do like the way January gives me time to reflect on the year just finished and think about what lies ahead.

One thing I’d like to do is keep my commitment to lifelong learning. My husband and I both recently started new positions at work that have put us back into growth mode.

Being able to learn, even after school days are long gone, isn’t always easy. But it’s essential to a meaningful, satisfying life. The economy, to say nothing of cultural values or other parts of the world around us, changes all the time.

Sure, it’s tempting to burrow into the status quo; go into ostrich mode. That’s part of the appeal of some political movements: Let’s return to an earlier, more predictable and stable time. Trying to adjust to change and acquire new skills, knowledge or attitudes can be a humbling and often uncomfortable experience.

I’ve decided this is the year I take fitness seriously. As with any new endeavor, I started off excited, and I enthusiastically looked forward to swimsuit season. But on the third day, I hit a wall. Hard. Completing the day’s workout required doing four different types of sit-ups — 30 of each. It probably should not have surprised me to learn that 120 sit-ups were beyond the reach of my core muscles. I hadn’t done a sit-up in at least two years! But the realization was discouraging. Maybe I just wasn’t cut out to be the type of person who could do 120 sit-ups in one go. Perhaps thinking I could be would turn out to be a very painful mistake.

And … it was painful. I spent the next 48 hours dreading my next core workout. I still felt sore when I went for my next round of sit-ups on day five, and was shocked to find that they were already noticeably easier than they were on day three. If I had quit after that first failure, I would have never have realized how much progress I had already made — progress that allowed me to succeed. How many other times have I made the mistake of quitting too soon?

This world wasn’t built by people who retreated in the face of personal difficulties. As supporters of liberty, we respect and admire people who invest in challenging themselves — the people who seize opportunities to grow and learn wherever they find them. They also, perhaps not coincidentally, benefit many others as well. Think of Steve Jobs or Oprah Winfrey or any number of other people who have faced troubles, met them and brought some measure of delight or joy to many others.

Liberty is great. It’s what we rely on to pursue our quest for a better life for Michiganders and for that matter, all people. Our pursuit of a better life isn’t limited to better public policies. It starts at home. With me. With you.

The year is still young. How will you change?