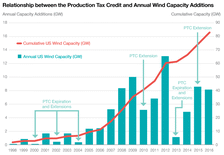 Foolishly impractical, especially in the pursuit of ideals (Merriam-Webster)
“The government’s incentives for wind energy production are quixotic.”

In the pursuit of clean energy ideals, state and federal governments have enacted some foolishly impractical restrictions and requirements in the electricity market. But now the list of special favors extended to politically privileged energy sources is roiling communities. 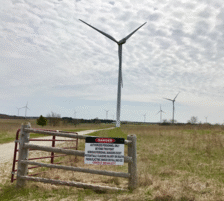 Wind energy is regularly touted as cost competitive with other energy sources. And, in a way, it is. But only if you deal with its intermittent and unpredictable nature. Wind can’t produce electricity reliably, like nuclear energy or fossil fuels. So, during the more than 65 percent of the time that it just sits there, a wind facility must be backed up by natural gas generators that can quickly be brought online to account for wind’s unpredictable nature.

Then there are the hundreds of millions spent building new transmission lines to connect distant wind developments to the grid. Add to that the special market carve-outs like the state’s renewable portfolio standard that mandates Michigan get 15 percent of its electricity from renewable sources by 2021.

After all that, there still are lavish federal government handouts like the production tax credit, which gives wind developers a subsidy amounting to almost 70 percent of the 2016 wholesale price of electricity in the Midwest. Although the industry tries to deny it, it is dependent on this tax credit, and the construction of new wind generation has always been tied to its existence. When political maneuvering allows the credit to wane or decrease, wind construction plummets. When Congress renews the subsidy, construction resumes.

But cost and reliability aren’t the only issues. Michigan’s energy policy is also sowing discord at the community level. For example, Heritage Sustainable Energy is seeking to expand its Garden Wind project near the Upper Peninsula community of Garden.

The development already has 14 wind turbines, but Heritage wants to build another 21. The people of Garden, conservation groups like the American Bird Conservatory, and even the federal and state government have all voiced concerns; some have even begun litigation to stop any further turbine development. The largest concern has focused on birds.

The construction site is a peninsula that extends 22 miles into Lake Michigan. It is a home to bald eagles, is surrounded by wetlands, and serves as a rest stop for migrating birds and bats.

As early as 2007, the U.S. Fish and Wildlife Service said it “expressed significant concerns” with Heritage Energy’s plans to “construct a commercial wind energy development” on the Garden Peninsula, warning it “could result in high levels of avian mortality.” As a remedy, agency staff recommended that windmills not be constructed within three miles of the shoreline. Heritage responded that a three-mile setback would leave little to no space for development.

The American Bird Conservatory raised similar issues in written correspondence, saying that “hundreds of thousands of birds and bats are killed annually through collisions with the fast-moving turbine blades.” The group’s estimate balloons to tens of millions when electrocutions and collisions with other wind infrastructure are included. It also raised concerns about the development displacing migration patterns and disrupting the bird-watching industry.

Heritage argued that its studies show “a single barnyard cat is more of a threat to birds than the entire Garden Wind Farm” and that windmills won’t kill any more birds than a home will. It also pointed to substantial economic benefits from wind development for local communities, such as job growth and tax revenue for the township and surrounding region.

But an Institute for Energy Research report estimated the net impact of federal wind subsidies in Michigan at almost minus $240 million from 2005 to 2014. So, wind developers and monopoly utilities might enjoy the windfall, but the rest of Michigan’s residents foot the bill. Economic benefits claimed for the project only exist because taxes are increased and renewable energy surcharges are added to monthly electric bills. Those “benefits” are extracted from everyone and then redistributed to wind developers, monopoly utilities and individual wind leaseholders in communities like Garden.

Looking beyond birds and economics, the people of Garden raise concerns about turbine noise, visual blight, property rights infringements and health risks from windmills. Those concerns inspired the Garden Township board to pass a noise ordinance in December 2014, restricting wind development. Heritage argued that independent studies have “consistently found wind farms have no direct impact on physical health” and sued the township. In November 2016, the two reached a settlement: The township amended the ordinance and the company dropped its lawsuit.

Heritage and Garden have yet another point of contention, however: Federal and state incentives for renewable energy cause strife in communities targeted for wind generation. Garden residents explained that when people are offered money in exchange for allowing windmills on their property, they often accept. The expectation is that if they don’t, someone else will, and if they’re going to be forced to live with the windmills, why not get paid for the trouble?

But decisions like this cause rifts in the community. Some residents will not allow turbines on their property for any reason or for any amount of money. They do not want the added nuisance and decreasing property values that are part of having even more of them in their community. Others choose to accept the money and the turbines. As the two factions debate, resentment builds and town meetings become heated and tense. One Garden resident described how a cousin, who favors wind development, now refuses to speak to him. Others have described how, when driving down the town’s streets, they no longer point out a friend or family member’s home; they point out, “for wind,” or “against wind.”

The federal and state mandates to build wind have forced these challenges into Garden and other Michigan communities. Local opposition to windmills is faring better than Don Quixote’s anti-windmill crusade, but Michigan residents are still forced to tilt against windmills because of quixotic state and federal policies. Instead of fighting Quixote’s imaginary foes, they’re fighting real foes who are acting for imaginary ideals.