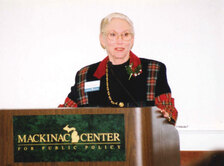 The Mackinac Center for Public Policy mourns the loss of one of its founding directors, Margaret Ann “Ranny” Riecker, who passed away April 7 at the age of 80 in Midland, Mich.

The Mackinac Center and the people of Michigan have lost an inspirational giant of informed public policy, civic service and philanthropy.

Ranny was one of five Michigan residents who formed the Mackinac Center’s board of directors after its founding in 1987. When she left the board in 1994, the organization was emerging as a strong voice in Michigan policy and a leader in a nationwide movement of state-based policy research centers. Then-Gov. John Engler wrote, “When the Mackinac Center speaks, we listen.”

Ranny, along with Midland resident Alan Ott, co-chaired the Center’s $2.4 million building campaign in 1997 that produced its current headquarters on Main Street in Midland.

In 2004, the Mackinac Center dedicated its board room to Ranny and her husband, John Riecker, who said at the dedication ceremony, “Ranny and I look upon the Mackinac Center as an anchor to windward, a seeker of true economic and political principles ….” John joined the board in 2006 where he remained a director until his passing in 2008.

Ranny was a trustee, and later also president, of The Herbert H. and Grace A. Dow Foundation, which has supported major Mackinac Center projects in education policy, science education, and more since the mid-1990s.

Ranny was also a founding trustee of the Council of Michigan Foundations, the chair of the Mid-Michigan Medical Center, and a trustee of Central Michigan University and Carleton College (her alma mater), as well as the Harry A. and Margaret D. Towsley Foundation. She held additional leadership roles with numerous other organizations including the Gerald R. Ford School of Public Policy at the University of Michigan and the Republican National Committee.

Ranny’s imprint is etched into our goal to improve people’s lives through policies enlightened by the nation’s founding principles.

I could always count on Ranny for straight talk and a reminder to stay true to first principles. She was always amazingly prepared to discuss or debate any subject. I knew if I could make my case to Ranny, I was ready for any challenge.