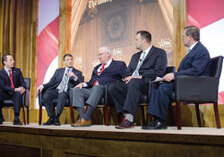 Vernuccio told the story of how right-to-work came to Michigan and gave an update about labor reforms around the country, gained from firsthand knowledge though his work on Mackinac’s “You Can, Too” tour.

Vernuccio closed the panel by noting that while it took 20 years to achieve right-to-work in Michigan, “It’s not going to be another 10 years” until the next state passes a worker freedom bill.

“It was an honor to share the stage with some of the biggest movers and shakers in Washington at one of the largest gatherings of conservatives around the country,” Vernuccio remarked after the panel. “Simply being invited to speak shows the influence and the importance the Mackinac Center is having both in Michigan and around the nation.”

Media coverage of Vernuccio’s visit to CPAC spanned the political spectrum, from National Review and Newsmax on the right to Huffington Post and Salon.com on the left.