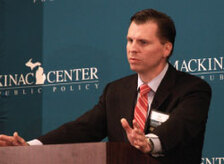 The Mackinac Center recently hosted two Issues & Ideas events in Lansing. These semi-regular forums feature experts from around the country who are brought in to discuss pertinent public policy issues.

On March 31, State Rep. Ken Yonker, R-Caledonia, spoke on “Roadblocks to Reform? A Review of Union Contracts in Michigan Schools.”

Rep. Yonker was the sponsor of several Michigan school reform bills a few years ago that changed teacher tenure rules, eliminated layoffs based only on seniority, and required student growth to be the main factor in teacher evaluations. 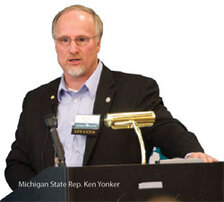 A recent study by the Mackinac Center showed that up to 60 percent of Michigan’s largest districts are violating these and other laws. Rep. Yonker says that those who do so purposefully should face “criminal charges.”

Rep. Yonker said the purpose of the education reform bills was simple.

“The intent of the legislation was to allow bargaining for teacher wages and benefits and nothing else,” he said, adding that union misinformation exacerbates confusion about the reform efforts.

He wants to enforce the laws because “one teacher can affect hundreds of lives.”

On April 23, former Utah State Sen. Dan Liljenquist discussed “How States Are Fixing Pension Problems — And Michigan Can Too.”

There is an estimated $730 billion to $4 trillion in unfunded pension liabilities across the states. These costs are crowding out services, harming communities, and causing public employees to worry that governments cannot keep their promises.

Sen. Liljenquist helped usher through reforms in Utah that shifted public employees to a 401(k)-type plan and was named public official of the year in 2011 by Governing Magazine.

Michigan is quite revolutionary around the country because the state began shifting new employees off of a pension plan in 1997 under former Gov. John Engler, Liljenquist said. This has saved up to $4 billion and is something he said Michigan “has not gotten enough credit for.”

But there are pension systems for teachers and many local municipal workers. The teacher system has an unfunded liability of $24.3 billion while some municipalities and counties are worse than the city of Detroit. Liljenquist said the state should move toward generous 401(k), defined contribution plans to provide “true retirement security.”

He pointed to Utah as a lesson.

“For 50 years, Utah made every payment, did everything right — we were 100 percent funded going into the economic downturn,” Liljenquist said. “But in 2008, one year of market losses blew a 30 percent hole in our pension fund.”

Shifting employees capped the liabilities and allowed Utah to move forward. “If you have an oil spill, what do you do?” Liljenquist asked. “First, you cap the spill. Then, you clean up the mess.”

Utah called its bill the “Wage Liberation Act” because freeing up money from the pension system allowed for salary increases and investments into important government services. Pension funding is crowding those things out in many places.

Liljenquist said moving employees to a 401(k)-style system is the most sustainable reform because it helps prevent future elected officials from backtracking. In Michigan, over the past decade, the state rarely met its minimum pension payments. And under a deal struck by former Gov. Jennifer Granholm, the state raided the pension funds to bail out a failed movie studio, among other deals.

“Getting retirement funds out of the hands of politicians is the best way to protect workers and taxpayers,” Liljenquist said.

“The states that refuse to make the move to defined contribution plans will languish behind those that do,” Liljenquist said. “Reality is not negotiable.”

To see a video replay of the events, go to Mackinac.org/Events.