In the mid-2000s, the Service Employees International Union (SEIU) targeted the assistance checks of Michigan participants in the federal Home Help Program as a potential revenue source. The Home Help Program, which was started in the 1980s, allows the elderly and disabled to be cared for in their homes instead of being put in institutions. A majority of the caregivers in the program are family members or friends who take care of loved ones. Despite claims that Michigan’s home-based caregivers were in the union by choice, more than 44,000 have given it the cold shoulder. As a result, SEIU Healthcare Michigan, the union most closely linked to the home health care dues skim that funneled $34 million away from Michigan’s most vulnerable residents and into union coffers, lost more than 80 percent of its members since the dues skim ended on March 1, 2013.

Based on an annual report the union is required to file with the U.S. Department of Labor, membership in SEIU Healthcare Michigan dropped from 55,265 in 2012 to 10,918 in 2013. The number of lost members appears to represent virtually all of the long-term home-based caregivers affected by the dues skim. Most of the members remaining in the union are apparently legitimately unionized workers employed at private medical facilities. The union may have included a formulated amount of caregivers in its 2013 tally to account for the dues and fees it received from them in January and February of that year while forced unionization was still in existence.

“This evidence shows the truth about the Granholm-inspired unionization of those in the Home Help Program,” said Patrick J. Wright, vice president for legal affairs for the Mackinac Center. “When given the choice, those in the program didn’t want to give the union a dime.”

Robert and Patricia Haynes of Macomb Township are an example. The couple receives Medicaid payments for the care of their two developmentally disabled adult children, who both have severe cerebral palsy, which significantly impairs their ability to speak and care for themselves.

“We are not anti-union,” Patricia told Fox News after Michigan Capitol Confidential reported on their plight. “I just don’t understand why we were forced to join because I have two disabled kids.” 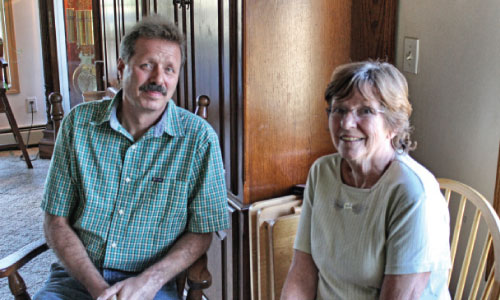 Another example is Steven Glossop, who cares for his mother, Linda, who lives with medical complications following heart surgery and a stroke. Through the Home Help Program, Linda receives a monthly Medicaid check to help defray the costs involved with the home care.

In 2005, the SEIU perpertrated a forced unionization of Michigan residents who were in the program. This took place through the use of a dummy employer, a by-mail stealth election, and coordination of state agencies and officials.

After the forced unionization was accomplished, the home-based caregivers were labelled “home health care workers” and SEIU Healthcare Michigan was created as the union affiliate to which dues collected from the Medicaid checks were sent.

With the dummy employer in place, those who carried out the scheme could claim the union had an entity with which it could bargain on behalf of the home-based caregivers. But there could really be no collective bargaining. The dummy employer, the Michigan Quality Community Care Council, which was created to facilitate the skim, had no authority over Medicaid payments or working conditions.

When the state Legislature periodically voted to increase the amounts of the Medicaid checks in the program, the union would be free to claim credit for the raise. Meanwhile, the union’s coffers grew richer by about $6 million per year. This “dues skim” lasted from 2006 to early 2013. Over that period of time, the scheme brought more than $34 million in dues and fees to the union’s coffers.

SEIU Healthcare Michigan officials have repeatedly been unresponsive when asked by the news media to comment on the due skim, the forced unionization or how it tabulates the number of caregivers it has claimed as members.

The loss of 80 percent of its members has not been the only blow to SEIU Healthcare Michigan over the past year and a half.  Seven of the eight protesters arrested at the State Capitol Building in December 2012 were identified as employees of the union. The arrests took place during demonstrations against the passage of Michigan’s Freedom to Work  law after the protesters tried to force their way onto the Senate floor.

In addition, SEIU, the international union behind SEIU Healthcare Michigan was fined almost $200,000 for concealing that it bankrolled Proposal 4 of 2012 — the failed ballot effort to lock the forced unionization of home-based caregivers into the state constitution and perpetuate the dues skim. According to state officials, the penalty the SEIU was assessed for the campaign finance violations was the second largest in Michigan history.

On the eve of the November 2012 election, in which the voters of Michigan rejected Proposal 4, Gov. Snyder replaced the MQC3 board of directors with members who represented the state instead of the union. In December 2012, these members voted to disband the dummy employer; which led to an end to the dues skim as soon as the collective bargaining agreement expired at the end of February 2013.