Taking the VoteSpotter Message to the Capitol 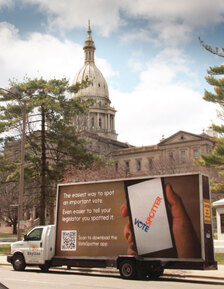 For months, the Mackinac Center has been promoting VoteSpotter, a revolutionary app that makes government transparency and accountability easy. And Michigan residents have responded. Currently, it’s being used in all 38 Senate districts and 108 of 110 House districts.

The media quickly noticed the value of residents knowing and evaluating the votes of their legislators. Reviews from The Frank Beckmann Show on WJR, The Detroit News, Midland Daily News, The Vic McCarty Show, The Ron Jolly Show and WWJ radio all said how VoteSpotter benefits Michigan voters.

On April 22, we took VoteSpotter on the road to the state Capitol. Outside, a mobile billboard canvassed the downtown streets and introduced Lansing commuters to the app that lets users vote on the votes of their lawmakers. Inside the Capitol, the Mackinac Center secured the West Wing corridor and set up an open house, greeting visitors and showing them how they can easily know what their legislators are up to and how to contact them instantly.

Visitors of all political backgrounds and beliefs interacted with the Mackinac Center staff, agreeing that what happens in Lansing should not stay in Lansing, but should be available to the public.

The road show did not stop there. Mackinac Center staff visited every office of every state legislator, giving them VoteSpotter literature and explaining to them why they will likely observe an uptick in phone calls and emails from constituents.

The effort demonstrated how VoteSpotter can help keep elected officials accountable and planted the flag of transparency for all to see. While the public cannot always be in Lansing, it now has an app that is. And if legislators are doing the right thing, they have nothing to worry about.