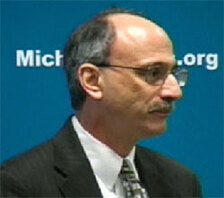 “For those who think that cap-and-trade is dead, take another look,” said Peter Glaser at the Mackinac Center’s Issues & Ideas forum on Jan. 20. Glaser, an attorney specializing in energy and environmental law, spoke to 95 attendees about the destructive regulations proposed by the U.S. Environmental Protection Agency.

According to Glaser, the Obama administration is trying to force the United States off fossil fuels, which are the cheapest forms of energy. “There is a reason we use fossil fuels in the United States: It lowers costs,” Glaser said. Restricting cheap sources of energy would have devastating effects on industry and daily life, with little environmental benefit.

Glaser received a J.D. from George Washington University and specializes in environmental regulation and litigation, focusing on air quality and global climate change. He has taken part in numerous EPA rulemakings and judicial appeals. Glaser has testified on climate change issues before Congress and is an expert on greenhouse gas regulatory matters.

As a result of Glaser’s testimony, state Sen. Tom Casperson, one of five legislators who attended the I&I, introduced a state resolution calling on Congress to adopt legislation to prohibit the EPA from unilaterally regulating greenhouse gas emissions. Casperson, chairman of the Senate Natural Resources Committee, invited Glaser to testify before the committee on Feb. 19. Remarks were followed by a lengthy question and answer session. The resolution passed, along with a similar resolution in the House.

The event was simulcast online, allowing 134 people to view it live, and 172 to view it since. Watch the video at www.mackinac.org/14379.